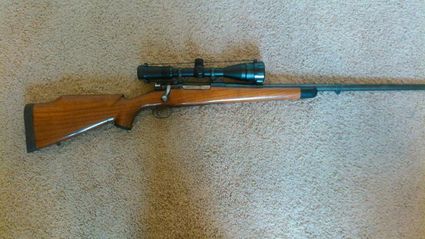 As the first rifle we discussed in previous issues, this one also had a concept of purpose at its foundation. Going back into history, William Jeffery was a competitor of John Rigby Company. Rigby is the oldest firearms manufacturer in England, and had an agreement with the Mauser Company pertaining to importation of their firearms.

In 1900, Rigby requested that Mauser enlarge their Mauser action for larger cartridges, and in 1911, used this action as the basis for their .416 Rigby Cartridge. Jeffery was thus unable to purchase the enlarged "Magnum" Mauser action. By some significant modification, the standard Mauser action could be modified to take a larger cartridge.

The Way Jeffery Made Their Rifles

The standard Mauser action was designed around a family of cartridges with a 57mm length designation, and maximum overall lengths in the range of 3.250. The .404 Jeffery however had a length of 3.530. In order to use the standard action, each had to be modified to take a longer, fatter cartridge with a larger case head. This was exactly the way that Jeffery made their rifles.

These rifles were made in grades from basic to extremely fancy, with wood and accessories appropriate to their cost. While the high-grade rifles were purchased by sportsmen of note, the base rifles were purchased by game departments in the African nations for use by their game rangers who patrolled their herds, culling injured or diseased animals, and protecting against poachers. It was the game warden's rifle that became my vision of the rifle I wanted to build.

After a careful search, I found the perfect starting point. The rifle began life during the buildup of the German Army before the Second World War, in 1937 at Mauser Werke, as evidenced by its S/42 and 1937 markings on the front receiver ring, as well as the military acceptance marks. This was not, however, a collector rifle.

As so many of these rifles, sometime soon after the Second World War, it had been converted to a hunting rifle. The conversion work had included re-barreling, restocking, drilling holes for a receiver sight, and latter for scope mounts. Also at some time in the past, the bolt handle had been changed to clear the ocular end of the scope. The rifle was currently in .30-06 caliber, and most of the work had been nicely done.

The Look Of Old, Trusted Rifle

One of the features which drew my eye was the stock. It had lines that spoke well to its age and origin. It had the look of an old, trusted rifle. The wood was not really plain, but not of a very fancy figure. It was lighter in color, and would clean up nicely, and yet I wanted it to show some of the marks from its obvious use. The shape of the cheek piece was classic. Also present were a grip cap, forend tip and butt plate. It was, in short, a neat old rifle, and after an exchange of a moderate amount of monetary remunerations, it became mine.

Looking back, I somewhat regret that I did not fire it in its original (to me) condition, but it was immediately disassembled. The wood was stripped, sanded and filled, with some of the deeper marks left to provide the aged patina of use. A recoil pad from "Limbsaver" replaced the hard butt plate. This rifle was going to be shot after all. Finish was a semi-gloss Tung Oil and showed off the pleasing grain without being too reflective.

Next came the task of barreling the Mauser receiver with the second barrel that had been ordered. This was a Krieger Chrome Molly Steel barrel that was also a tribute to the barrel maker's art. Fitting and chambering followed the exact process previously described, yet as soon as completed, the barrel and receiver were separated to allow for the start of the modifications to the receiver itself.

First the opening in the bottom of the receiver had to be made longer to allow the .404 Jeffery loaded cartridges to pass through into the chamber. Removing metal from the rear of the opening to the point where the bolt can first contact the case rim makes up part of the increase. This is supported by removal of metal from the rear of the magazine box.

While this can "weaken" the magazine box, it must be remembered that when this rifle was first designed, it was made to withstand the rigors of the battlefield. This is no longer an issue. The remainder of the length is made up by removing a small part of the lower feed ramp, and re-contouring the ramp to permit cartridges to feed from the magazine. This must be very carefully done, and prior to starting, you need to understand how the bolt locks into the receiver, and how to avoid weakening that area.

Careful Attention Must Be Paid

Next, it is important to remember that this new cartridge is also larger in diameter than the original round. This again relates to removal of metal from the internal rails of the receiver, again, using small amounts, and trial and error methods to avoid too much metal removal. The shape of these internal rails is an integral part of the controlled round feeding of this type of action, and the transition of the cartridge from the magazine to the chamber should be smooth. Careful attention must be paid to angles as you move the rail taper forward to accommodate the more forward shoulder of the new case.

Another issue is the Magazine Box. While the removal of metal from the rear made some additional room, doing the same to the front will not provide the room needed, as the loaded cartridges are still too long. The usual old school remedy was to remove the front of the magazine box, and make an extension which is welded or silver soldered into place.

As this rifle was going to be glass-bedded anyway, we decided to try something different. With hard kicking calibers, we can mix finely ground particles of stainless steel into the bedding material for increased strength. For this rifle, we removed the front of the magazine box and when we glass-bedded the bottom metal, formed the front of the magazine box with the reinforced bedding material. After final shaping, the new front was polished to ensure smooth feeding of cartridges. 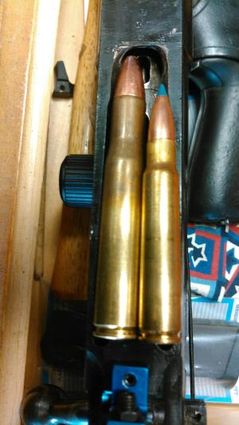 The difference in the 8x57 Mauser and the 404 Jeffery shows how much the action was opened up.

The next steps were to open up the face of the bolt and the extractor to accommodate the larger diameter of the .404 cases base. As a final modification to the extractor, a bevel was cut into the front face of the extractor to allow it to snap over a cartridge rim if a round had to be single loaded into the chamber. Cartridge feeding was then refined by polishing surfaces where needed.

Editor's Note: These dedicated gunsmiths continue their amazing art form and are living examples of how rewarding it is to be fascinated by both history and craft and have the expertise to refurbish these treasured arms. For more information than we can provide here, please contact Mike Berger at michaelj257@hotmail.com.