How to Keep Your Guns

Bob Corbin Answers In This Interview 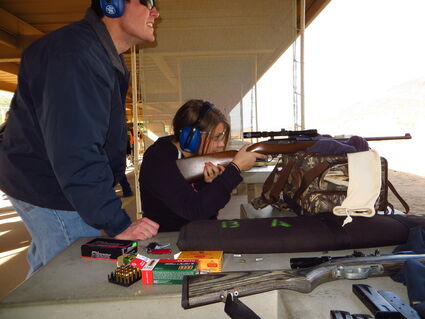 My granddaughter Emily loves shooting rifles as well as pistols. She's also pretty good on the clays range with a shotgun.

Bob Corbin, former Attorney General of Arizona, is a staunch supporter of our constitutional right to bear arms. He served as AG from 1972 to 1991, the longest of any other elected official. Mr. Corbin served as President of the National Rifle Association from 1992 – 1993 and is currently one of the ten board members who serve on the NRA Civil Rights Legal Defense Fund board.

Mr. Corbin met with Pastor Ryan Rice, who is now heading up the AZ Quail Today website (www.azquailtoday.com) , and we listened in on the conversation.Pastor Ryan had reached out to people on Facebook for questions they'd like to ask Mr.Corbin, and here they are, along with the answers, which are direct quotations from Corbin and Ryan.

Q. How can we be proactive about protecting our gun rights?

A. First of all, join the NRA. In the last two to three months, they've been getting 10,000 new members every month (this was in January of this year). The more members the NRA has, the more powerful and influential it is. Also, volunteer when the NRA reaches out for members to help with tabling, etc.

There is also another good group, the Second Amendment Foundation. Their website says that they are "dedicated to promoting a better understanding about our Constitutional heritage to privately own and possess firearms. To that end, we carry on many educational and legal action programs designed to better inform the public about the gun control debate".

Mr. Corbin says they are a great group. He also familiar with the Arizona Citizens Defense League, which is based in Tucson. This is where grassroots activists take a stand, working at the Arizona legislature to get strong pro-rights bills written and passed into law, while stopping bad bills.

Q. In the event that Biden is able to pass sweeping gun control legislation, does he (Mr. Corbin) think that the current AG will be filing suit to protect law-abiding gun owners/hunters?

A. Mr. Corbin doesn't believe they can pass such legislation. Remember, there are lots of Democrats in the NRA. Because of the Heller vs DC ruling, in which the Supreme Court said that the second amendment protects your right to keep and bear arms for traditionally lawful purposes, such as self-defense within the home, he doesn't think that the gun grabbers will prevail. This was the first case to decide that the second amendment protects an individual, not just a militia.

Q. Since the governor of Arizona signed a bill saying that federal mandates that violate the second amendment won't be followed in AZ, what does that really mean? Is it in the realm of possibility that federal agents could storm the homes of gun owners in Arizona? Doesn't the bill just say that Arizona won't spend funds on those anti-gun mandates?

A. Mr. Corbin believes that if the Feds try to tell us we can't have our guns, Arizona law says they can't take them. Arizona has the best laws for gun owners in the country, he says. Could Feds storm in? They may do that – he has no idea. The governor could call on the militia – who knows how big that is. There are a lot of sheriffs who flat out say they won't enforce laws if it comes to confiscation.

NOTE: The bill that Governor Ducey signed is the Second Amendment Freedom Act, which would block enforcement of some federal gun restrictions.

Q. A letter came in the mail about gun grabbers and the UN Small Arms Treaty, saying that Biden and Harris are trying to get into our legal system, and call for gun registration, limiting guns and ammo, etc.

A. Yes, a bill about the UN Small Arms Treaty has been sitting for twelve years and has not signed off as treaty, but there is an effort and they may sign the treaty, but the Constitution says that no treaty can override an amendment or any of the other principles in the United States Constitution. Article VI of the Constitution makes that clear. However, the treaty could make it impossible to get guns from overseas, which would make it so it would be very difficult to get guns anywhere. It's been sitting for a long time, but now that Democrats are in power, they might sign it.

Pastor Ryan asks, does that mean confiscation or a limit on how many guns we can possess? Mr. Corbin says all we need is ten more Republicans in the House. Will we ever get to confiscation? God help them. So many states say they won't enforce such laws. You need to be proactive – join the AZCDL and get on the Arizona Legislation Right To Speak program.

Q. What legal support does the basic NRA membership provide for in the event a citizen in good standing is being charged with a gun crime?

A. The NRA's Civil Rights Legal Defense Fund has a lot of money, and if you get arrested for a gun crime, you get a lawyer and have him write to the SNR with the facts of the case and tell them how much money you need. If it looks like you have a good chance of winning the case (in other words, you are in the right), NRA will pay. They get a lot of requests, and Mr. Corbin is on the board that meets three times per year to review the requests. They have $300K to distribute at each meeting. If the board decides that you were in the wrong, or did something illegal, they won't pay. The ten-member board is all lawyers.

Q. What can we do to protect our 2A rights? 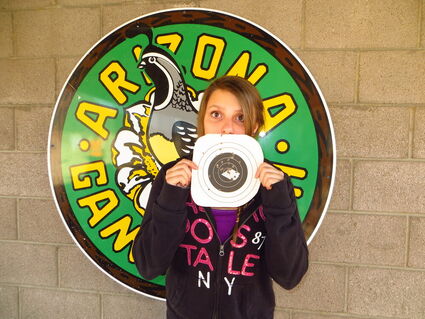 She's rightfully proud of her target.

A. VOTE. Join the NRA and the AZCDL. They are the ones who watch the legislators. In fact, Mr. Corbin's exact words were "Damn right we watch them."

You do not have to actually speak to the legislature to use this feature. Simply sign up, and when a bill comes up that you are interested in, you can log on and let your legislature know how you feel. The Arizona Citizens Defense League (AZCDL) sends regular newsletters to let you know when bills related to gun legislation are being heard.