Our Clock Is Ticking

We have all been led to believe that democracy is the best way of life and that the United States is the best example of how a society should be lived. I have long held that belief, but current events have had me wondering if that is really true or if as a sportsman democracy could put an end to the pursuits that I hold dear. How can this possibly be? Let's follow along and see if you agree with my train of thought.

The Right To Hunt And Fish

The right to bear arms is always front and center of any of our political discussions, but let's take a look at something that I think we all take for granted. How about hunting and fishing? Those who hunt and fish have never been able to explain to those who do not how we feel when we are in our element.

There are some on the far other side who consider what we do as barbaric or worse, animal cruelty. The biggest portion of the public has little or no opinion on hunting. Some knew that their grandparents or parents hunted and fished, but they themselves do not. Let's say that the percentage of the non-hunting society is 85 percent, which means that we, as hunters, pursue our recreational processes with the unspoken approval of the non-hunting public.

A Look At California

One only has to look to California for a model of what could possibly happen here in Arizona or worse, across the United States. In California, the sport of hunting and fishing is almost a dirty little secret. Hunting certainly has been ripped by their liberal media as a Neanderthal activity and one of the members of their Game and Fish Commission, Dan Richards, was removed from his position because he legally harvested a mountain lion in another state while he was a commissioner.

The following is a quote that exists on the Internet regarding his firing.

Jennifer Fearing, California state director of the Humane Society of the United States, applauded the commission's action and faulted Richards for posting graphic photographs of the hunt online and for criticizing detractors. 'Richards has paid a high price for flaunting his out-of-sync values in Californians' faces,' she said. 'We are very glad to see the commission hold him accountable for his unprofessional behavior.

So, we have the president of the California Fish and Game Commission being fired for a perfectly legal activity and daring to post photos of his trophy. It is no secret that we have more than a few residents who at one time lived in California. It is also no secret that the demographics of Arizona are changing.

We were, at one time, considered the last bastion of the Wild West in the Southwest. Now, however, we have many more urban people than those who are rural. Cattle ranching, the timber industry and even mining come under fire from groups that have an avowed dislike of these activities, along with hunting and fishing. How long will it be before the uninformed public, gets driven by a liberal media into some frenzy about hunting or fishing?

There is a strong need to educate the public of why hunting and fishing are ethical good choices for recreation. Failure to do so will simply allow those who literally are hunting us to continually press for a law that prohibits hunting or fishing. California has many mountain lions, but the voters there, under a "democratic" process have declared the mountain lion to be a "special species" and no one can hunt them.

While the current catch phrase has been "The winds of change are blowing" in regards to our latest national elections, I would caution all who love to hunt and fish to pay attention to those same winds when it comes to hunting and fishing.

Our Clock Is Ticking 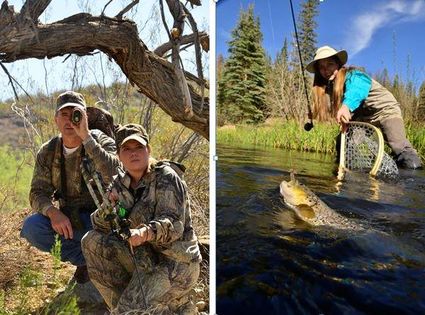 The best quote that I have ever heard goes along the following lines: "For those who hunt and fish, no explanation is necessary. for those who do not, no explanation is possible". That may be our own death knell at some point in the future unless we educate the non-hunting public and do it in a professional and courteous manner.

Our clock is ticking as more and more of the public distances themselves from the basic life cycle that is sanitized into cellophane-wrapped meals that show no semblance to the animal or fish from which it came. The democratic process may someday curtail us in our now-legal pursuits and that is where a democracy can fail.