The Vision Of Two Gunsmiths Has Become Reality 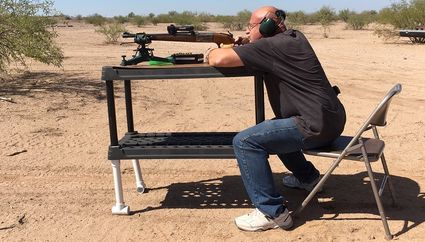 Well, the Savage Model 1899 finally had a range day, with both good and not-so-good results.

First the good news, it shot very well with both .38-55 Winchester and .375 Winchester factory ammunition. Recoil was no problem at all, and the balance of the rifle made it great handling and a bunch of fun to shoot. Accuracy was excellent with both loads.

Now the bad news. I reload for almost everything I shoot. .375-diameter bullets are mostly designed for the .375 Holland and Holland and the .375 Ruger. Lever actions were designed around the shorter, flat-nosed projectiles.

When I tried some 220 grain Hornady Interlock bullets, I experienced a problem. The loaded rounds would not cycle through the rifle's magazine. Quick analysis (and more than a little help from Pat) determined that the ogive (taper of the bullet toward the nose) was different.

In that the rifle was originally a .30-30, measurement indicated that .020 of an inch (1/2 the diameter difference at the ogive) will need to be removed from the left-feed ramp side. This will be corrected at the next opportunity to disassemble the action. In the interim, factory ammo, or single-loaded reloads will have to suffice. No matter, it is a great little rifle!

Sometimes interesting repercussions occur as the results of a mistake, and such an event is the beginning of the second half of this story (or rifle number 2). The first rifle was an intentional, carefully thought out and executed plan over two years in the making. It was to be created to undertake an adventure. It was to be the fulfilment of another desired hunting trip (number 7) to Africa, and an interest in firearms history.

Pat had the desire to make this trip, as well as a very deep respect for the beauty of the land, the animals, and the historical significance of certain firearms.

I too have always been interested in the historical aspects of guns. As a result, I have an affinity for certain manufacturers and calibers that sometimes stray from the normal. In particular, calibers with less-frequently encountered names in their nomenclature have an appeal.

Calibers like the .257 Roberts, .35 Whelen, .577 Snider, .275 Rigby, and anything with Holland and Holland in its name. Not that there is anything wrong with Remington, or Winchester; they too are great names.

Yet, the less-frequently encountered calibers are just fun. They present the combination of history, being different, and sometimes the allure of far-off lands. They do present certain challenges such as obtaining ammunition. Walmart is not the place to go expecting to pick up a box of .458 Lott ammo!

Rifle one starts with such history. First the caliber, .404 Jeffery, which interestingly enough, is not a .404 caliber, but a .423. Anyone versed in cartridge designations will not be surprised by this. An article could easily be written about the confusion in caliber names, but I digress.

The William J. Jeffery Company in England introduced the .404 in 1905. It was also known as the .404 Rimless Nitro Express, and by its metric designation, as the 10.75 X73 millimeter. Prior to the 1950s, it was the most popular cartridge for magazine-fed dangerous game rifles (the competitors were the .416 Rigby and the .425 Wesley Richards).

Pat had a plan to build a custom rifle of exquisite quality well worthy of the trip to Africa. The action was to be a modern custom rendition of the old model 70. A best-quality barrel, beautiful walnut, and select accessories were also part of the equation. Such is the gunsmith's art, blending components into a thing of functional beauty. Parts came from their respective sources, and the vision began to take shape. It was then that the mistake was realized.

It was a small error, easily made - selecting parts over several weeks, different vendors, and an order just a mouse click away. There were not one, but two .423 barrel blanks, each a custom order, and each non-returnable. Then came the question from Pat. "Do you want to build a .404 Jeffery? " To some, this may be an offer they can't understand. To me, it was an opportunity not to be passed up.

And so the project to build one rifle became two rifles. While the calibers would be the same, the builds would be different.

Caution!!!: Parts of this article are going to be technical in nature. Do not operate machinery after reading until you know how your body is going to react in this circumstance.

The heart of any firearm is its action. As stated above, the pre-'64 Model 70 Winchester is considered a premier bolt action. Derived from the Mauser model 1898, with a number of revisions, flowing through the earlier model 54, it is smooth, strong and classic in looks.

A company called Montana Rifle Company makes a variant called the model 1999. The long-action model has sufficient length to accommodate the .404 Jeffery Cartridge, and is absolutely a beautiful sculpture in functional metal. One of the strengths of this Mauser pattern is that the round is controlled by the extractor as it leaves the magazine instead of being pushed by the bolt.

While this may not sound too important, it becomes critical when a hunter becomes a little panicked while hunting a dangerous game animal. The controlled feed will prevent a double feed tying up the rifle, and may save the hunter's life.

Another advantage is that the extractor takes almost a third of the cartridge rim as a bite, ensuring that even the most stuck cartridge comes out of the chamber. This is followed by a solid steel post as an ejector. No spring and plunger to jam. Admittedly, these occurrences are extremely rare, but they have happened. This was a truly appropriate action for a high quality rifle.

Nothing Without A Barrel

A rifle is nothing without the barrel. If the action is the heart, then the barrel works as the body. It contains the fired cartridge, and gives the bullet its consistent direction. A quality gun barrel provides a rifle with a basis for accuracy.

The barrel for this rifle is made by Lilja, a company noted for high quality, and used by competitive shooters. The bored-out steel blank is rifled using a button with the rifling pattern that is pulled through the barrel blank, creating the pattern of lands and groves at the predetermined twist. The smooth rifling created is then polished (called lapping) in the direction of travel of the bullet. Each barrel has this direction in which it was rifled, which must be followed for the required accuracy.

It should be noted here that the following descriptions are basic observations of the process, and are not meant as instructions on a "do-it-yourself project." These processes, if done correctly, can result in an extremely accurate and safe rifle.

Don't Try This At Home!

Conversely, if done wrong, can have catastrophically dangerous outcomes. I would not attempt these without Pat's close supervision, and even then, some parts are extremely difficult and it's easy to make an expensive or dangerous mistake. In short, kids, don't try this at home!

The contoured barrel blank (not chambered or threaded) is concentrically secured in the lathe, and the breach end so trimmed to provide a base from which to thread, in the process, ensuring that the shank (large part of the barrel) is appropriate for the cartridge to be chambered, as well as creating pleasing lines.

This type of action actually has two shoulders to be formed, so measurements are critical. There is the shoulder present in most rifles, where the barrel meets the receiver. There is an additional shoulder on the inside of the receiver that actually helps controls a critical dimension called headspace. The barrel is carefully threaded to the exact dimensions of the receiver, insuring full contact of the inside shoulder, with a more aesthetic contact with the outside of the front receiver.

The next process involves the chambering process. A specialized tool called a "chamber reamer" is used for this process. Each caliber requires a separate reamer, and the reamer is made based upon the standardized caliber specifications. At the front part of the reamer is a guide that follows the rifling of the barrel to keep the chamber concentric to the bore.

The reamer also has grooves that allow the metal shavings removed in the process a place to go. The chambering process requires frequent cleaning and lubrication. As the chamber approaches final dimensions, frequent measurements are taken to ensure against cutting too deep, and making sure the chamber is still cut to the full depth allowing a cartridge to be fully seated.

This process involves a number of trial fittings, as well as the measuring process. The careful fitting and chambering of the barrel is a critical part of the accuracy equation. The barrel is then joined to the action, tightened in a barrel vice, and the headspace (measurement of the chamber, with the bolt closed) is again verified. We now have our barreled action to work with.

The next step is to cut the barrel to the final length. A number of factors apply here.

Magnum calibers require a longer barrel to fully burn the larger powder charge; however the penalty is weight and portability. A long barrel is difficult to maneuver in deep woods, or heavy brush.

Another consideration is the possible instillation of a muzzle brake. This is a devise which redirects gasses from the burnt powder to the front and sides to reduce felt recoil and muzzle rise. The penalty here is length and a significant increase in noise for the shooter.

The barrel on this rifle was originally cut at 26 inches due to the planned trip to Namibia, which has large, open plains, and the tradition of the long barrel from the open-sight era. It looked awesome, but will soon be shortened to about 22 inches, as this length is adequate to attain good velocity with the .404 cartridge.

Tell us about your favorite vintage rifles.