With the care of two experts, the Model 1899 is now ready for the range.

Editor's Note: The beginning, middle, and end of this restoration saga areal included as we feel it is important to tell the whole story of the remarkable skill and commitment these two men have shown to a once-abandoned antique rifle.

Part 1: 'Rescued' From The Corner

It sat quietly in the corner of the shop, behind a group of other rifles. This was the corner where trade-in rifles that were not in the best shape were placed. This particular rifle had begun its life back in 1906, at the Savage Arms factory. It was a Model 1899, with a 24-inch-long barrel in 30-30. This was a very popular combination for a deer rifle in its day.

The Project Just Seemed Like The Thing To Do

I am sure that there are similar rifles in the corners of any gunsmith's shop. Trade-ins, broken-parts guns, guns too-expensive-to-repair, and thus unwanted. Every now and then comes a time when a project seems like the thing to do. So it was destined to be with the Savage.

So, what to do? How to resurrect this old hunting companion of a time long ago? Its original iteration did not seem like the way to go. As we talked about the project, some pieces seemed to come together. Criteria included compact, fast handling medium big bore, powerful and a mix of old and new seemed to blend well.

And So It Was That We Began

Caliber was the first component we explored. What would work in that action without a large amount of work (this idea would later present challenges). The medium large bores contained a mix of old and new, and during the perusal of the loading manuals, Gunsmith Pat Knight found a very interesting anomaly. The dimensions of the old (1876) .38-55 Winchester were amazingly close to those of the much more recent (1978) and more powerful .375 Winchester. Power levels precluded mixing them in old Winchesters as the design would not handle the pressure (except for the heavily reinforced "Big Bore 94" which was introduced with the .375 Winchester cartridge). And so it was that the project began.

Daniel "Pat" Knight retired as a Sergeant from the Pinal County Sheriff Department, with experience as a firearms instructor, and a member of the SWAT Team. He is also a retired gunsmith, who has attended factory sponsored armorer schools, as well as Gunsmith classes as close as Yavapai College, and as far away as Oklahoma.

The first phase of the project was the disassembly and inspection phase. Prior to disassembly, it is important to have a good understanding of the particular firearm. It had been a couple of years since we had worked on a much more recent vintage Savage Model 99, and through the approximately one hundred years (over 100 if you include the Model 1895, its predecessor) of production there were some minor changes made. I needed to review some diagrams to be sure I was ready to keep up with Pat.

This rifle does not appear to have been apart in probably a half century or more. With many rifles, they are carried much more than fired, but not this one. The mechanism showed some very clear signs of use. Of the ravages of time inflicted on this 100 year old specimen was the afore mentioned brakes in the upper tang area of the stock. This opened a way for dirt and debris to get into the mechanism. Fortunately, there was no serious rust and corrosion as a result.

As the rifle was disassembled, each part was cleaned and inspected. Any part that showed excessive wear was slated for replacement. A major part of the plan was the caliber change, which necessitated the locating and obtaining those caliber specific parts. The internet is an amazing tool for these searches, mostly replacing those weighty tomes of parts catalogs.

Locating parts was fairly simple with the exception of the cartridge spool of the internal rotary magazine. The part had undergone a couple of minor dimension revisions, and the newer parts for a Model 99 would not fit the earlier Model 1899. The only choices were to modify new parts to fit the gun or old parts to fit the cartridge. After careful measurements, we decided to modify the original spool. This had the advantage of mixing the old with the new. In that the new cartridges were larger in diameter in the areas to be modified, careful removal of metal and several trial fits were completed before the new rounds would fit inside the confines of the receiver, and function properly.

Something Unusual In Modern Rifles

Removal of the old barrel revealed a flat topped thread which was something unusual in modern rifles. Fortunately, it presented no problems for Knight, who would do some extensive re-contour work on the new barrel. A fairly heavy .375 bore was selected. These days, barrels of this caliber are mostly fitted to either .375 Holland & Holland or .375 Ruger caliber rifles, but not this one. In addition to sights and a barrel band sling swivel, it would also be fitted with a mount for a scout type scope. For those readers not familiar with the term, this provides a mounting area on the barrel, in front of the receiver for either a long eye relief scope or a variety of red dot type sighting systems. A primary advantage of these systems is the ability to keep both eyes open and maintain superior peripheral vision.

Part 3: Success And Ready For The Range

An XS Sight Systems Scout rail was obtained from Brownell's, a gun parts supplier. This system involves a tube with steps on the inside for a tight fit on the barrel. It is secured using set screws and a two-part epoxy compound. We selected the model with an initial inside diameter of 1.08" due to the heavy contour of the barrel.

One of the advantages of working with Pat on the lathe was to turn the diameter of the barrel to match the front of the receiver, as well as each of the steps in the scout rail, to make it a perfect match. The rail was an extremely close fit, but was still secured with epoxy to ensure stability of any future sighting systems. The barrel was also cut with a recessed target crown for accuracy. Headspace was checked and the barreled action test fired with both rounds, which were then examined.

In trying to combine new and old parts, we would have liked to use the original fore end wood. It was in good enough condition, but with the new barrel and scout rail, it was just too narrow to make it fit. I still had the desire to use old wood for the forend, so I compromised by cutting an old salvaged bolt action stock. The forend, forward of the magazine well, was long enough to provide some nice figured wood that would look good on the rifle.

While modification looked involved, it was actually very straight forward, and reshaping went smoothly. The most difficult part was the cutting of a dovetail to attach the forend to the barrel. This forend was also glass bedded to the receiver, again to maximize accuracy potential.

Also fitted to the new barrel was a barrel-band-type sling swivel. This had two purposes. First, it keeps the sling swivel away from the hand in recoil. Second, and far more important, it looks cool. For the same cool factor, a barrel-band front sight was selected. Both of these items were from New England Custom Gun and obtained through Brownells.

A rear stock was obtained from Numrich Arms, and fitted to the receiver. This was also glass bedded to prevent any potential for cracking. It was also fitted with a one-inch recoil pad for shooting comfort. I considered the beautiful curved metal butt plate, with its classic looks for almost a full second before logic took hold. The wood was finished with a hand-rubbed Tung Oil based finish, in more coats than I care to remember. The finish was then rubbed out, polished and final waxed.

In The Old Days

In the old days, before scopes, many rifles were fitted with rear tang mounted peep sights, to improve their precision. The rear tang of this rifle was so drilled and tapped. I was very lucky to locate an old "Marble" brand peep sight that fitted almost like it grew there. 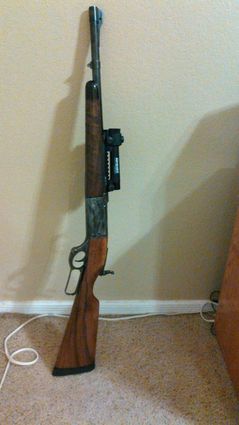 Metal finish was again a blend of old and new. The new was the matte black aluminum of the scout rail tastefully engraved with a silver ".38-55 Win." for the historic caliber. Old was a little more difficult. Many old rifle receivers were color case hardened. This process involves high heat, bone and charcoal, and special jigs to keep the metal from distorting. Using a variety of chemicals, I was able to simulate most of the effect on the receiver and lever. I just wish I could find a way to get the bright blue (maybe someday). The remainder of the rifle was blued, in a traditional appearance. The rifle was then reassembled and it cycled perfectly, using dummy ammunition (always work safely).

Next, a red dot sight was fitted, and both sighting systems were aligned with a laser bore sight device. It is now ready for the range.