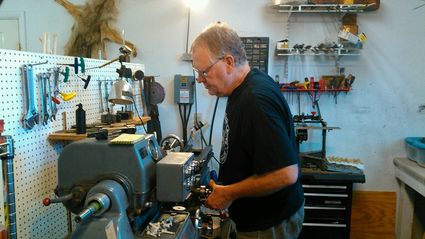 Editor's Note: Although Part 1 of this incredible restoration story appeared in the July issue, it is included here again so that the whole story of the old Winchester is not lost. Berger continues below with Part 2 and, thankfully, will follow that with a Part 3 in future.

Daniel "Pat" Knight retired as a Sergeant from the Pinal County Sheriff Department, with experience as a firearms instructor, and a member of the SWAT Team. He is also a retired gunsmith, who has attended factory-sponsored armorer schools, as well as gunsmith classes as close as Yavapai College, and as far away as Oklahoma.

The first phase of the project was the disassembly and inspection phase. Prior to disassembly, it is important to have a good understanding of the particular firearm. It had been a couple of years since we had worked on a much-more-recent vintage Savage Model 99, and through the approximately one hundred years (over 100 if you include the Model 1895, its predecessor) of production, there were some minor changes made. I needed to review some diagrams to be sure I was ready to keep up with Pat.

Clear Signs Of Use

This rifle does not appear to have been apart in probably a half century or more. With many rifles, they are carried much more than fired, but not this one. The mechanism showed some very clear signs of use. Of the ravages of time inflicted on this 100-year-old specimen were the aforementioned breaks in the upper tang area of the stock. This opened a way for dirt and debris to get into the mechanism. Fortunately, there was no serious rust and corrosion as a result.

As the rifle was disassembled, each part was cleaned and inspected. Any part that showed excessive wear was slated for replacement. A major part of the plan was the caliber change, which necessitated the locating and obtaining those caliber-specific parts. The Internet is an amazing tool for these searches, mostly replacing those weighty tomes of parts catalogs.

Modify The New Or The Old?

Locating parts was fairly simple with the exception of the cartridge spool of the internal rotary magazine. The part had undergone a couple of minor dimension revisions, and the newer parts for a Model 99 would not fit the earlier Model 1899. The only choices were to modify new parts to fit the gun or old parts to fit the cartridge.

After careful measurements, we decided to modify the original spool. This had the advantage of mixing the old with the new. In that the new cartridges were larger in diameter in the areas to be modified, careful removal of metal and several trial fits were completed before the new rounds would fit inside the confines of the receiver, and function properly.

Removal of the old barrel revealed a flat-topped thread, which was something unusual in modern rifles. Fortunately, it presented no problems for Pat, who would do some extensive re-contour work on the new barrel. A fairly heavy .375 bore was selected. These days, barrels of this caliber are mostly fitted to either .375 Holland & Holland or .375 Ruger caliber rifles, but not this one.

In addition to sights and a barrel band sling swivel, it would also be fitted with a mount for a scout-type scope. For those readers not familiar with the term, this provides a mounting area on the barrel, in front of the receiver for either a long-eye-relief scope or a variety of red-dot-type sighting systems. A primary advantage of these systems is the ability to keep both eyes open and maintain superior peripheral vision. 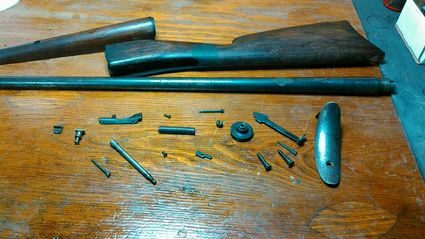