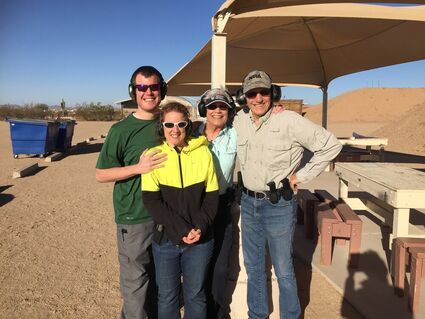 Taking a gun class as a family is fun. Here we all are at Ben Avery.

Learn And Feel More At Ease With Your Firearm

According to the National Shooting Sports Foundation (NSSF), over five million Americans became first-time gun owners in 2020. That's great news for the sport! In fact, in the first seven months of 2020, over 12 million guns were purchased, up more than 70 percent over the same period in 2019. The numbers might have been higher if gun shops hadn't been scrambling to meet the demand. And you were wondering why ammo is so scarce? Seriously, it's not a government conspiracy – ammunition, powder, primers, etc., are just being snapped up as soon as the hit the shelves.

It's a fact that you'll need ammo if you take a shooting class. Visit any sporting goods store in person or online and you'll likely discover that they are sold out. All you can do is keep trying. Some websites will show that things are out of stock right on the first page, and those are great. Otherwise you have to click on the ammo you want and then find out they don't have any. If you do find it – buy it right away. I've actually had things go out of stock between putting them in my cart and checking out (online, of course). If it's any comfort to you, reloaders are having the same problems. Primers and powder are scarce as hen's teeth.

Here's a word to the wise: When buying online, make sure you do a quick check on the site. Search for reviews of the site to make sure they are kosher. And if they only take Zelle and won't take a credit card, say goodbye. It is impossible to get your money back from Zelle. They'll even tell you so. Save that for sending money to your kids. You already know you won't get that back! And remember, if it sounds too good to be true, it probably is.

When Margie and I took our CCW class, the only ammo we needed was a few rounds to prove we were capable of hitting a target. We went to Ben Avery with the teachers and the class and had to place a certain number of rounds on target from a short distance. After that it was off to the store for classroom teaching and it was fantastic.

We took ours at Cabelas, and we learned a lot. These classes are totally worthwhile even if you don't plan to carry all the time. I don't think an online course could be as good. We were able to get fingerprinted on site and the whole shebang. We also each got taken alone into a room where a screen was set up. I went in not knowing what to expect. They handed me a blue gun and played some videos on the screen. The videos varied: One was a man pulling an armed robbery in a jewelry store. One was two guys fighting in a parking lot. Stuff like that. Your job was to choose: Shoot or don't shoot. It was very instructive.

The Arizona Game and Fish Department classes are fantastic – you use their guns and ammo, so you don't have to bring anything. They are suspended right now because of COVID, but you should keep checking at http://www.azgfd.com to see when they start up again. They have an introduction to firearms class for women only called the Annie Oakley course where the basics of safety and terminology are taught, plus there is time on the range using AZGFD guns and ammo. It's an amazing bargain at just $20 for adults and $13 for youths. Classes are kept to 9 to 17 participants and you have to be at least 9 years old.

Another great introductory course is Youth Firearms Safety. This is for boys and girls ages 9 to 16 and covers the basics of safety and terminology. The kids also have the option to learn the fundamentals of marksmanship on the range with all equipment and ammunition provided. This class is $25 and you have to pre-register, plus all the participants have to be accompanied by a parent or legal guardian. You can actually register now and they'll let you know when classes start up again.

The Game and Fish Department's Wild Bunch classes are geared to families and are open to men and women. The course covers basics of safety and terminology, plus includes time on the range, again with the Department's equipment and ammunition. You have to be at least 9 years old to take the class. Cost is $20 for 18+ and $13 for youths. These classes are also held to 9-17 participants. Again, you can pre-register and they'll let you know when classes start up again.

Classes are being held now at Gunsite, which is at Paulden, Ariz. Gunsite is world-reknowned for firearms courses of all kinds. Many of the classes here last for more than one day, and they have an incredible place with over 3000 acres, over twenty ranges, and many indoor and outdoor simulators. They teach not only marksmanship, but also gun handling and mindset.

The list of classes that are offered here is too long for this short article, so I urge you to visit http://www.gunsite.com and check them out. They'll give you options for places to stay while you're there as well. There have classes for ladies, teams of two, armorer's courses, rifle, pistol – you name it, they have it. They're not cheap, but they're worth every dime.

Margie and I have taken many courses at Shooters World. The great thing about taking a class is that you can practice shooting from different positions, shoot while moving, etc. They'll teach you things like what to do if your gun misfires, how to swap out magazines in a hurry, how to use a flashlight while holding a gun – all depending on which class you choose. Some classes have pre-requisites. 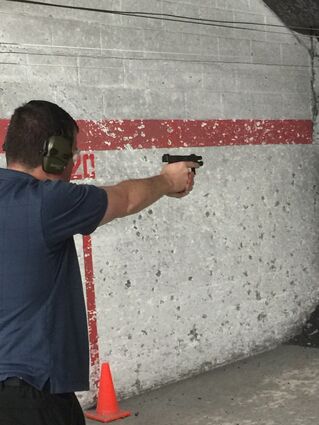 A good instructor will have you shooting much better by the end of the class.

They have great class for Ladies Only: /Women's Handgun I. No pressure, no stress – learn about different types of handguns and ammo, pros and cons of different styles of handguns, firearms safety, marksmanship fundamentals, even gun maintenance. The class is 4 hours and costs $89 ($71.20 for members) and you'll need a handgun, two magazines, and 100 rounds of ammo. They do say that handguns can be provided for free, but I assume you'd have to purchase the ammo. Shooter's World has two stores – Phoenix and Peoria. Visit their site at http://www.shootersworldaz.com.

There are a lot of places all over Arizona that offer gun classes, and I strongly urge you to take a class if you are a first-time gun owner. You'll learn a lot, feel more at ease with your firearm, and you'll have a great time.