Five Reasons Why You Need A Concealed-Carry Permit

Arizona allows all of its citizens to legally carry a concealed weapon, but a CCW Permit is still a great idea for a lot of reasons. First and foremost is the training you receive when you attend a CCW class. I've been shooting all my life, but I learned a lot of new stuff when I attended a CCW class.

One thing that really opened my eyes was the "shoot/don't shoot" portion at the end of the class. I was handed a plastic pistol that interacts with a large screen, and a series of scenarios played out: an armed robbery in a jewelry store, a fight in a parking lot, a purse snatching, etc. Things happened fast, just as in real life, and I had to make decisions.

Shoot or don't shoot? It was during this exercise that the instructors reminded me that just because I carry a gun doesn't mean I have to use it.

The day-long class I attended was put on at Cabelas and Ben Avery and covered everything from guns and ammo to legalities and mindset. I've seen classes advertised online that promise you a CCW in an hour, and I strongly advise against that.

Contact Cabelas or Shooters World or any good gun range and ask about CCW classes. Pick one that gives you a chance to shoot. We had to qualify with our pistols at Ben Avery before going to Cabelas for the class and fingerprinting, etc.

Once you get your CCW, don't let that be the end of your training. Shooting is a perishable skill – take classes and shoot regularly.

Another good reason to have a CCW is reciprocity with other states. You can find a list online, and many states honor Arizona CCWs. Some states have a written agreement with Arizona and some recognize the permit without a written agreement. Some just flat do not recognize an Arizona CCW. It's your responsibility to contact the states you plan to travel in or through and find out for sure.

The Federal Gun Free School Zones Act makes it a crime to knowingly possess a gun on the grounds of public, parochial, or private school unless the individual is licensed by the state. Since school grounds are legally defined as school property and everything within a thousand yards of school property (except private property like houses), you can see that you could technically be in violation of the law nearly all day every day if you don't have a CCW.

Our Arizona Attorney General Mark Brnovich issued an opinion that this law does not apply to private schools. Also, Governor Doug Ducey signed a bill preventing a school governing board from prohibiting someone from legally possessing a deadly weapon on a public right of way adjacent to a campus.

I have researched this school thing extensively, and have simply come away confused. As far as I can tell, firearms in school parking lots are only legal if they are unloaded and remain in the vehicle under the control of an adult, and if unattended, the firearm must be out of sight and vehicle locked. In this case, I think it's better to be safe than sorry, at least if you're actually in the school parking lot or grounds.

It's also illegal in Arizona to carry a weapon into an establishment that serves alcohol unless you have a CCW permit and you're not drinking alcohol. However, if the establishment has a sign forbidding weapons, you have to honor that sign. That's the rule at any establishment, store, etc.

Regardless of whether you have a permit or not, if there is a sign saying "no guns allowed", don't take your gun in. Contact the store and let them know you'll be shopping elsewhere, and why. You'd think they'd be happy to have good guys with guns inside, but what the heck. There are plenty of places that don't forbid guns.

Get A CCW And Keep Current

The fifth reason to get a CCW permit is that it makes it so much quicker and easier to buy a firearm. Instead of the background check and the wait that goes with it, you just hand over your driver's license and CCW and you're good to go. There are also some very confusing websites out there about National Parks, city parks, state parks, etc. 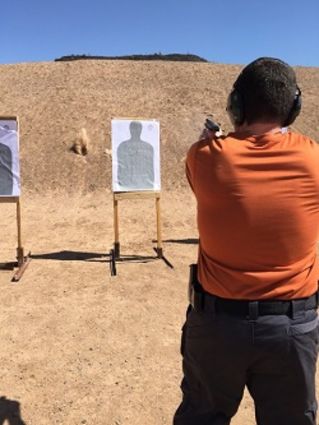 Once you have your permit, buying a gun is a lot easier. But make sure you keep up on current laws and when in doubt, contact the venue you plan to visit and find out their policies, especially for city, state, or federal parks and buildings, etc.

My advice is to call before you go and find out what their policy is. Or see if you can find the rules for that specific park online. Things change all the time, and you are responsible for knowing the law and for your own actions, so get a CCW and keep current on firearms laws.

• Go to azdps.gov for more information on CCW permits