A total of 437 student archers representing 30 schools from throughout Arizona, participants on the state level of the National Archery in the Schools Program (NASP), recently competed in the 2018 state tournament and 3D shoot at the Ben Avery Shooting Facility in Phoenix.

The Arizona Game and Fish Department coordinates NASP on the state level and hosts a half-dozen state qualifying tournaments throughout the academic year, beginning in September and ending in March. This year's state tournament, which took place in early March, was the largest in the 11-year history of the event.

The top three boys and girls who competed in the bullseye and 3D events in three divisions – elementary, middle and high school – received awards. In addition, the top overall boy and girl also took home a new bow, donated by NASP, and a new archery target, courtesy of FeraDyne Outdoors LLC. The top three teams in each division also were awarded.

"We created an animal fact sheet, with the help of our (Terrestrial Wildlife) Branch, to provide students, coaches, parents and spectators with some habitat information, as well as conservation facts," Gerchar said.

Gerchar said Arizona was represented by 124 student archers in mid-April at the Western Nationals in Sandy, Utah, while the Eastern Nationals will take place May 10-12 in Louisville, Ky. (For the first time, the tournament has been divided into a Western and Eastern event.) 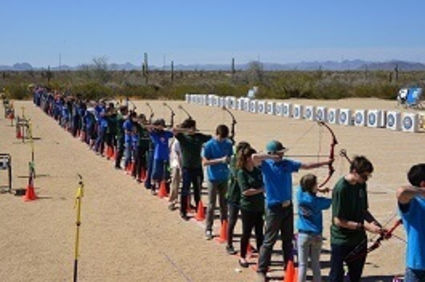 "In previous years, only about 50 students would [have been] able to travel to Louisville to participate in the national tournament," Gerchar said. "Now we are able to bring almost all of our qualified archers."

Arizona's NASP program is funded through an excise tax on the sale of hunting and shooting sports equipment. No state general funds are used to support the program. Game and Fish administers the program for the purpose of promoting safe, responsible aspects of the sport, as well as wildlife conservation as part of the Wildlife and Sport Fish Restoration Act (WSFR).