The Gunsmiths Finish, Test Their Martini

We finally had a brief bit of time to do some additional work on the Martini, after catching up on the urgent work for customers who were going on hunts and had not planned ahead. It was a lot of extra hours, but almost everything was completed.

Back To The Martini

And now, back to the Martini. A pilot hole was drilled where the forend-attaching screw would be placed. This hole is deliberately undersized to allow for some movement if it is not placed in exactly the right position from side to side. A center punch was placed through the hole. And a small mark made on the barrel to indicate where to drill.

The barreled action was then placed in the mills cross vise to ensure it remained centered. A small mill bit was used to locate the hole, and everything re-measured to ensure proper placement. The bit used to drill the hole was marked to ensure depth, as a confirmation for the milling machine markings, and the hole was drilled to depth.

The hole was then tapped with a tapered tap, and then with a bottom tap to have a complete range of travel for the screw being used to attach the forend. An escutcheon was fabricated on the lathe out of stock from the local hardware emporium. This helps distribute the screws pressure on the forend, and prevents the screw head from sinking into the wood of the forend.

A weaver style rail was selected, that was close to the barrel contour, for a scope mount base, and then the bottom was contoured exactly to the rifles bull style barrel. Two holes were drilled using the method described above, and then tapped to 8-40 screws, to attach the scope mount to the top of the barrel. Using 8-40 screws for this non-recoiling rifle might seem like overkill, but the weight of the rifle coupled with the potential for someone to grab it by the scope, makes this a cheap insurance policy.

For initial testing a BSA Sweet 17 scope was selected and mounted. I could only bore sight it as I had never obtained a laser bore sighting device in .17 caliber ( When starting with the .17 caliber cartridges, you will need to ensure that you already have, or purchase appropriate sized cleaning materials. Even the cleaning rod for your .22 caliber rifles will not fit). Now to the range, to see how it would do.

Shooting At The Range 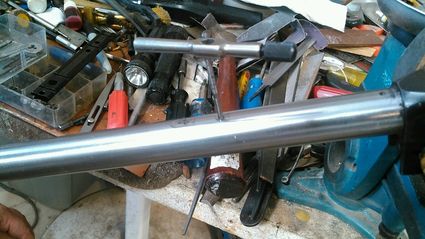 Shooting at the range presented two problems. The rifle's firing pin strikes just slightly toward the cartridge center, resulting in some misfires. This will be fixed with a slight firing pin alteration. The other problem is the difficulty of counting bullet holes when they are all in one tiny group. This rifle has a definite tendency to stack rounds in the same hole, with group sizes that look like a chewed up .22 hole.

With an initial zero set, this rifle will see some increased ranges for a further examination of its capabilities. It will be interesting to see what ranges the wind effects really come on, and how the bullet is affected.

Until the next time, good luck and safe shooting.