The Gunsmiths Give Us A History Lesson 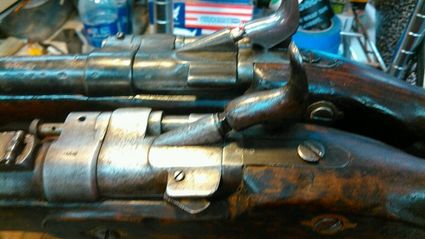 These Martinis are neither shaken nor stirred. Instead they are made to be shot. Of course I am referring to the Martini-Henry Rifle... So where did these Martini rifles come from?

In learning about firearms prior to working on them, it is important to understand what was going on in the world at the time. Early progress in firearms design was usually motivated by the world situation, or at least the situation in the country of origin. It is also true that the genealogy of the firearm is also important to its development.

Many times the clue as to how a gun is disassembled comes from this source. The improvement of firearms throughout history usually involves building on the ideas of others. A frequent result is found in the name of the resulting firearm such as the Martini-Henry in this article.

During The American Civil War

During the American Civil War, there were some cartridge rifles used alongside the numerous muzzle loaders - rifles that fired cartridges, including the Henry, the Spencer, The Burnside and others paved the way to the transition from muzzle loaders after the war.

Although there were a number of repeaters (the Henry was referred to as..."that damned Yankee rifle you load on Sunday and shoot all week!"), military establishment was notoriously slow at adopting such repeating-rifle systems, to the extent of having magazine cutoffs on the 1903 series Springfield rifles, so the soldiers would not waste bullets.

In America, the huge stocks of .58 Caliber Muzzle Loaders were converted to "Trap Door" rifles. This system, developed by Erskine S. Allin of the famous Springfield Armory, became the model 1865, using a .58 caliber cartridge. In this system, the breech "door" flipped forward. The caliber of these rifles was first reduced to .50-70 and later .45-70.

In England, A Similar System

In England, a similar system was used to perform the same function. An American named Jacob Snider designed a way to convert the English .58 Caliber muzzle loaders using a side-swinging breech door hinged on the right side of the action, with a manual extraction system. This modification used a cartridge that was called the .577 Snider (a .58 caliber round). These rifles are occasionally available, as they were in service from 1867 through 1901 throughout the British Empire.

If You Are Lucky

If you are lucky enough to find one, do not expect to go down to the local Wal-Mart to pick up a box of ammo, but they can be fired inexpensively (after being checked by a gunsmith for safety). Although an oddball in itself, primed 24-gauge shotgun shells are available from several sources. Cut them off at 2 inches long, put in a 70 grain charge of black powder slide in a .577 caliber Minnie ball, seal with Wonder Lube and have a blast. The thick cloud of smoke and the relatively mild recoil make it a fun rifle to shoot.

Depending on the origin, condition and individual barrel, accuracy may not be that great. Early models made for export to the Colonial forces used smooth bore muskets as their basis. Tactics of the time were volley fire by ranks, and individual accuracy was not important. Rest assured: this does not take away either historical interest or the fun factor.

During This Time Period

During this time period, rifle development proceeded, and service life of rifles in front line service was relatively brief. In the English system, the rifles that were replaced by new models filtered down through reserves, constabularies and then Colonial forces.

Henry Peabody developed a falling-block action. In a falling block, the breech slides down to expose the chamber. Peabody's system was significantly improved by a Swiss designer named Friedrich von Martini, which the British combined with a polygonal type of rifling that had been developed by Alexander Henry. This rifle was placed into service starting in 1871, only four years after the Snider Enfield.

The Martini-Henry rifles were designed from the start as cartridge-firing rifles, and boasted improved accuracy and a higher rate of fire at about 12 rounds per minute. For a cartridge, the .577 Snider round was tapered into a bottle neck using a .45 caliber bullet. This round was called the .577-.450.

It should be noted that these rifles can be found in other calibers, to include a smooth- bore shotgun variant. The rifles were later even chambered in the .303 British service round (these rifles were referred to as Martini-Enfield's) which far exceeded the original design specifications.

Perhaps one of the most famous uses of these rifles came during the Zulu wars at a battle at a place called Rorke's Drift, where 139 British soldiers fought off several thousand Zulu warriors. This battle was well depicted in the movie titled "Zulu". The Martini soldiered on until withdrawn from service in 1904. That is not to say that it was not still used. It was reported that soldiers of the 101st. Airborne Division recovered one in 2011.

After being withdrawn from service, W.W. Greener converted rifles to .22 long rifle caliber for target shooting, and Birmingham Small Arms (B.S.A.) also made rifles for this purpose. Today, these rifles can be found on full-sized standard actions, and on small frame "Cadet" actions. While there is nothing wrong with the .22 long rifle cartridge, something different is usually a more interesting build.

To me an interesting cartridge was the recent .17 caliber cartridges. The .17 Mach 2 started strong, but seemed to kind of fizzle out in popularity when Hornady came out with the .17 HMR (Hornady Magnum Rimfire.

While this cartridge was going strong, the very new .17 WSM (Winchester Super Magnum) had some very interesting ballistics, but also presented a problem. When the original rifles were converted to .22 long rifle, it was necessary to modify the breech to fire a rimfire instead of a center fire cartridge. The .17 WSM is not based on the .22 caliber line, but instead was developed from what was reported to be a .27 caliber nail gun casing.

The question was, would the firing pin reliably be able to fire the larger diameter rim, or not. There was only one way to find out, and so a .17 caliber heavy contour barrel was obtained, threaded, chambered and tested.

Bad news: The firing pin hit 64 thousandths in from the rim, and would not work with this caliber cartridge. That left the .17 HMR, which was derived from the .22 Magnum case. The chamber area was cut off the barrel, behind the taper of the case neck, and the barrel was rethreaded and chambered in .17 HMR. 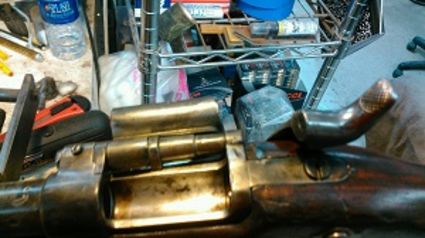 After confirming the round would reliably fire, the real work started. The breach (chamber) end of the barrel required a bevel on the bottom to allow the breach bolt to rise in the action and close as the lever was operated. This bevel could not reach the chamber area of the barrel.

Next was the extractor to remove fired cases. This type of extractor was tripped by the falling breach block, and levered a case from the chamber by fingers that fit under the rim of the fired case on each side. These fingers fit into areas removed from the breach end of the barrel above the bevel and at 3 and 9 o'clock positions relative to the chamber.

Removal of metal must be precise, and accurate as to position. Testing fit by repeated trial and error insured both fit and reliable function. The barreled action was test fired and functioned perfectly.