The Two Gunsmiths Finish Their Story

'Working on guns is a very interesting skill to learn, and a very satisfying process to become involved in.' Following is their chapter of completion, the conclusion of this fascinating project.

Editor's Note: We at Arizona Boating & Watersports sincerely appreciate these two gunsmiths' sharing their story of and passion for rebuilding vintage guns. (Personally, I also appreciate the guidance given by retired Chief Mike Berger to our granddaughter Kelsee Haws while she was a student at Central Arizona Valley Institute of Technology (CAVIT) fire academy.)

As the rifle began to take on its final appearance, some of the little details began to come to the forefront. The magazine box needed a little more work to hold the full three rounds (a reduction from the original five due to the increased diameter of each cartridge) along with a very small adjustment to the rear of the box.

These were addressed by a minimum amount of metal removal on the sides of the magazine box, and removal of a little metal on the original bolt stop, which would permit the bolt to align with the very rear of the lengthened magazine box, reliably picking up the next round during feeding. This was also enhanced by a stronger magazine spring to ensure proper presentation of rounds from the magazine.

After some internal debate, I also decided to add a new trigger mechanism into the mix. While it is a fact that a good trigger does nothing to improve the theoretical accuracy of a rifle, it does everything to improve the practical accuracy of the rifle. A good trigger is a pleasure to use, and enables the shooter to not have to fight the rifle for a repeatable release.

There are a number of excellent aftermarket triggers made for the Mauser rifle. Some of these have some interesting features, but for this rifle, I wanted the trigger to be mostly hidden, and leave intact the safety that operates at the rear of the bolt.

Timney Triggers is an Arizona company that has been making quality triggers since the 1940s. They produce several models for the Mauser, including a couple that met my exact needs, as well as being reasonable in cost and simple to install and tune. I have always been happy with both their products and their customer service.

Before long, a "Sportsman" model was attached to the Mauser, and when assembled, only the slightly wider, grooved finger lever showed its presence. When installing a trigger, it is critical to ensure that there is enough room for the trigger finger lever to move through its full travel without any contact with the trigger guard. Failure to do this can result in an unsafe rifle.

Take Your Time To Do It Right

There is sometimes a bit of metal removal that needs to be performed in the slot for the trigger to provide this clearance. Take your time, and do it right. In some models, additional wood will also need to be removed for the trigger to go into the stock. This inletting should be done neatly, and a finish applied to prevent the wood from swelling and interfering with any functions.

Another frequent modification to Mauser rifles is a reshaping of the trigger guard. The Mausers origins as a military rifle necessitated the extreme levels of strength designed into this part of the rifle. The result, although entirely functional is somewhat lacking in aesthetics.

Removal of metal from the sides of the guard, front and rear, as well as blending of the contours results in a cleaner appearance. It also provides a smoother transition when placing the finger on the trigger just prior to the shot. Depending on the use of the rifle, or in this case the desired appearance, reshaping can be minor, or taken to a high level transition.

For this rifle, I went functional and clean in appearance. I also left the original magazine catch alone instead of converting to a faster method of release. The thought of an inadvertent release on a dangerous game rifle somehow seemed to go against all logic.

This rifle came with sling swivel studs on the stock. While this is fine for most rifles, a stud on the forend of a rifle that generates significant recoil forces will result in an unpleasant sensation in your support hand as it slides and comes in contact. With this in mind (and having been made painfully aware of this situation in the past), a barrel band ( N.E.C.G.) for the front attachment was substituted, and the hole in the stock filled with a flush fitting, blued screw.

The Barreled action was then glass bedded into the stock, and all related parts were fitted to insure fit, and proper relief for function.

The Issue Of Sights

The next dilemma was the issue of sights. While the rifle was built for a particular look, I was not yet certain what I wanted to do. I had an appropriate barrel band front sight that was a match for the barrel band, but the rifle looked very clean and classic as it was. The great news was that a decision did not have to be made immediately, and I had an antlerless elk hunt coming up.

Metal Finish Was Next

The issue of metal finish was next. Cerakote was the most protective option, and would look like matte blue, but back in the day, these rifles were blued. I polished the metal, engraved the caliber on the barrel, and then was faced with what type of blue process to use. Hot tank bluing would present a beautiful new gun look, but that was again, not with the plan.

I chose to use a Brownells product called Oxpho-Blue. With proper prep work and application, it was easy to replicate old rust blue. Cleaning with TCE, heating with a torch, and then re-cleaning removed all oil from the pores in the steel. A little elbow grease and fine steel wool provided a worn, used appearance in the normal high wear areas.

Ready For Zeroing The Scope

My new old rifle was now ready for zeroing the scope and working up loads for accuracy. New Hornady brass was used, which, along with Barnes 400 grain TSX bullets, soon produced a load of surprising accuracy, although the very high quality of all the components assembled should have foretold this outcome.

While the accuracy was great, the recoil from shooting this rifle from a bench was no fun at all. These rifles are best fired from the shoulder in a standing position to allow the body to move with the significant recoil developed, and yet a rifle is made to be fired. For a number of my other big-bore rifles, I had worked up reduced loads that were very comfortable to shoot. Why not this one?

I had cases and primers, and measuring case volume was not a problem. Powder was an easy choice, as IMR Trail Boss has been very successful for my other rifles. Trail Boss is a high bulk for weight powder developed for Cowboy Action shooting with cast lead bullets. These rifles are most enjoyable to shoot with lighter-cast lead bullets, and now to the problem (you knew there was going to be one...). Remember the odd bore diameter.

Where To Find Bullets - Or A Mold?

Where to find bullets, or a mold for casting my own? The mold was going to be a custom proposition, but there was a light at the end of the tunnel. With high hopes that it wasn't on the front of a train, I put in a call to Lee Precision Inc. Their extremely helpful staff agreed to make me a swaging die that would allow me to bring down the .429 diameter lead pistol bullets to the .424 diameter I needed for my rifle. 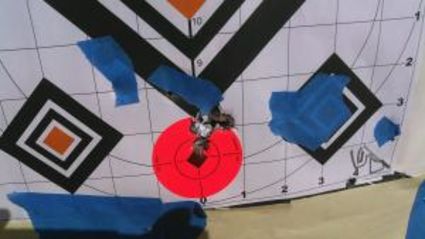 These big rifles really can shoot!

The wait was well worth the outcome, and I can have fun shooting loads lighter than a .45-70, with very good accuracy. I just have to be sure to get any lead residue out of the bore, prior to using full loads. The reduced load makes both of these .404 Jeffery rifles a real pleasure to shoot.

I truly hope you enjoyed the story of this build. Working on guns is a very interesting skill to learn, and a very satisfying process to become involved in.