Attending a class is the best way to learn defensive pistol skills.

There is no denying that the best way to keep your skills sharp is practicing. Shooting is no different. If you want to be good at it, you have to practice. Going to the range is good practice for trigger control, etc., but there are limitations at the range. You can't move around, you can't draw, you can't rapid fire, you can't shoot from cover - etcetera, etcetera. To practice defending yourself, you need to develop some special skills. A lot of those can be practiced at home.

First off, I'm going to recommend that you go online and find good pistol classes in your area. Margie and I take classes at Shooters World, where they have excellent teachers, including military and law-enforcement guys. Once you've been taught a few skills correctly, you can practice them at home.

Safety First: If you are going to practice at home with a real firearm, unload the firearm, empty the magazine, and double and triple check that the firearm is completely safe and unloaded. Keep all ammunition and loaded magazines in a different room, locked up. There should be absolutely no way you could absent-mindedly load live rounds while practicing.

At the classes, you will learn and practice a couple kinds of reloading tactics. The two basic ones are called Administrative Reload and Tactical Reload. You can practice both of these at home.

An Administrative Reload is something you do while your gun is holstered. You simply reach back, remove the magazine, and insert a new one. I have absolutely no idea why you would need to do that. As far as I'm concerned, a gun in a holster is left alone unless you pull it out to use it.

We were taught two different kinds of Tactical Reloads. A tactical reload is something you do when you've fired several rounds and you're not sure how many, so you slam in a new magazine just in case. In one, you just hit the magazine release and let it drop. In the other, you grab the fresh magazine and hold it in your non-shooting hand, remove the magazine that's in the gun with that same hand, put the fresh magazine in, and stow the used one in your pocket. Only full magazines should be in the magazine holder.

This is something you can practice at home, but first you have to be taught how to do it. That's why you need classes. I'm sure they have videos online that show you how as well, but there are a lot of weirdos out there, so be careful who you listen to.

An emergency reload is called for when you're in a gunfight and you've fired your last shot. In this case, you just drop the empty magazine on the ground, slam and new one in, and get back to business.

There are several reasons why a gun might misfire, and one of the most common reasons is called a stovepipe. After the gun is fired, if the empty shell doesn't get away in time, it gets stuck between the slide and the barrel and it sticks up like a stovepipe.

There is a standard procedure that should be the first thing you do if you get a misfire. It's called tap, rack, and roll. First, pull the weapon back into your workspace, in front of yourself. Keep the barrel pointed downrange at all times. Tap means smack the bottom of the magazine, hard. If the magazine isn't inserted properly, the gun won't fire. Rack and roll are performed together: Grab the slide in your non-shooting hand, hold it firmly, and push the gun forward hard while rolling the gun over on its side so that the stovepipe can fall out. Make sure you roll it the right way - only one side will be open.

If tap rack and roll doesn't fix it, you may have a double feed. In this case, drop the magazine, then rack and roll. If you don't drop the magazine, it will try to put another round in the chamber, and that won't work if there are already two trying to get in there. If there is a shell stuck in the chamber that doesn't come out when you rack, you can't fix it without prying it out of there. In this case, run like hell - you're out of the fight.

Tap rack and roll should become second nature. You can practice by using an empty shell and making a stovepipe. We practiced having a round stuck in the chamber by using dummy rounds and an empty shell. Again, going to a class to learn this first hand makes practice on your own a lot easier.

In this practice you will be pulling the trigger, so it is imperative that you double and triple check that your gun is unloaded, there is no live ammunition in the room, and that there are no loaded magazines in the room. If you're worried about pulling the trigger on an empty gun, use dummy rounds. You can get them at any sporting goods or gun store.

Find a wall in a safe direction. Even though the gun is completely unloaded, you still want to point in a safe direction. Stand with the gun in shooting position with the end of the barrel about an inch away from the wall. Line it up so you can see the front site through the back sites. Your trigger finger should be along the slide. It is never on the trigger until you are ready to fire.

Put your finger on the trigger and press it back until you hear it click. If the front sight moves, it means you're moving the gun. This will make you miss. Remove your finger from the trigger, then rack the gun and try again. You should do this over and over, keeping your eyes on that front sight through the rear sites. If you do this right, it will help you train yourself to look at the sights, press the trigger without moving the rest of your hand, and keep your eyes on the sites instead of prairie-dogging to see where you hit.

If you get good at this, you can try it with an empty shell or a coin balanced on the front site. This isn't possible with all guns, but if you can, give it a try.

The thing about classes and the range is, that even if you get to actually shoot, and even shoot while being timed from a draw, you almost never get to shoot when drawing from a Concealed Carry. There is a famous drill called the Tueller Drill. This is a pretty old drill (1983) and the premise is that a healthy male can cover 21 feet in 1.5 seconds. It could be even less time that. The point is, if someone is coming at you with a knife, how long will it take you to draw your weapon and fire? In most cases, especially from concealed like inside the waistband with your shirt tucked in over it, it will take you a lot longer than that. A guy with a knife could kill you before you even got your gun out.

The best way to practice doing this is with a blue gun. These are plastic replicas that don't shoot. LaserLyte makes great ones - it's the kind I have, and you can get them to match your actual carry weapon. They also sell lasers that fit in the barrel of the blue gun, and targets that will show you where the laser hit - more about those in minute.

Get a blue gun to match your carry gun, and put it in your Concealed Carry holster. Get someone to time you. Maybe have the person stand 21 feet away then hit the stopwatch as they run toward you. Did you get the gun out before they got to you? Have them keep moving back and try this over and over. Practice until you can get the gun out smoothly, aim, and fire. Don't get frazzled and just point and shoot. Aim. You may be amazed at how far away an attacker has to be in order for you to be able to shoot him before he is on you. 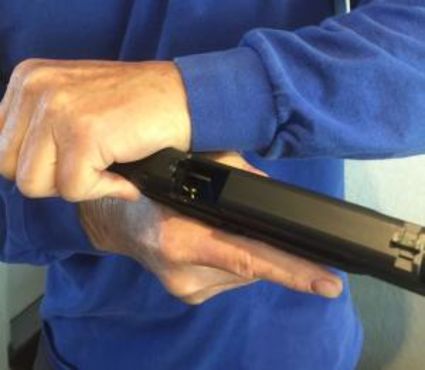 Another fun thing you can do with the LaserLyte gun is practice shooting moving targets. You'll need the laser and the target as well. Margie got me the whole set for Christmas and we have a blast with it. Have someone hold the target while they are running toward you. Our hall is about 21 feet long, so we hold the target while darting from room to room across the hall, then charging down the hall. It's amazing how few hits you get!

Practice makes perfect, and if you're going to carry a gun for self defense, you absolutely need to practice. Try some of these drills, get a LaserLyte gun, and join a competitive shooting league. Go to uspsa.org and find a league near you. There are all kinds of shoots at all different levels and you'll get to shoot moving targets, shoot while you are moving, shoot from cover, etc. It will really improve your shooting and you'll have a lot of fun, too. It isn't expensive, either - except for the ammo, of course. Have fun, be safe, and practice, practice, practice.