There Are Many Things To Consider

Once you get your Concealed Carry permit, you have to decide how you're going to carry. There are lots of options, and the bad news is that you really won't know which one you like best until you've tried them.

And, I don't mean just try on a holster at a store - you've got to actually put a gun in that holster and WEAR IT for a few days. Don't base your decision on what your buddy uses – holsters are different for every person. You're probably going to end up with quite a few holsters in the drawer that you pretty much never use, as well as several that you wear at different times.

There are several different ways to carry, and for each method, manufacturers produce a variety of styles of holsters. The method you choose will probably depend a lot on how big you are. It's way easier for a big, burly man to conceal a full-size pistol than it is for a smaller man, especially if both men are wearing their shirts tucked in.

The position your carry in is also a personal decision. You can carry on the side, near your appendix, in the back, or even on the side opposite your draw hand. Many inside-the-waistband holsters have a clip or two that slide down over the top of your pants and enclose your belt. This keeps them in place.

Other inside-the-waistband holsters are soft fabric of some sort. These go around you before you put your pants on, and they can be adjusted to fit snugly. These are especially nice for ladies, because you don't have to worry about your gun dragging the waistband of your pants to the floor when you're using the restroom.

Some of these are simply wide elastic bands with holster areas sewn on, and many of these also allow you to carry extra magazines. Some of them are more like soft belts with a wider holster area.

Some guys prefer to carry "shoulder" holsters. These actually position the gun under your arm. A man who wears suit jackets all the time might find this useful. They even make undershirts for men and women that have removable cloth holsters which attach to the shirt via hook and loop material. You can position the holster to make it easy for you to draw. These shirts fit very, very snugly to keep the gun from moving around.

Ankle holsters are another option, although most people would only consider this for a small, possibly a backup, pistol. These also come in a variety of materials, and most of them also entail the use of a sort of garter system to keep the gun and holster from flopping around.

Concealed carry for a woman can be tough. Women tend to wear more tailored clothing, which makes the bulge of a gun difficult to conceal. They make holster bras, but not every woman is well endowed enough to conceal a firearm there. Under the arm is a possibility, as is inside the waistband.

A smaller firearm is obviously easier to conceal, especially for smaller women. When you're wearing a dress, you might consider a holster that straps to your thigh. I personally don't recommend concealed-carry handbags, just because thieves often target women's handbags and you don't want a thief to become an armed thief.

Another option for men as well as women is a pocket pistol. These are very small handguns that can be put in a special little holster that slides into a deep pocket. The shape of the pocket pistol holster disguises the shape of the pistol so that it isn't obvious that you are carrying. By the way, when people can see the gun that you are trying to conceal, it's called "printing".

These smaller guns have disadvantages - they obviously hold far fewer rounds, and the smaller the gun, the bigger the recoil. But, pocket pistols are still very popular and almost every gun manufacturer makes them.

Consider The Belt As Well

One thing you also have to consider is the belt you will wear with your holster. Those tactical belts made from nylon web with lots of Velcro and those big metal loops look pretty gnarly, but you should really try one on with your holster before you buy one.

They are designed so that the belt has to loop over on itself and close with Velcro. This makes the front part of the belt very thick - way too thick to go through the clips on your holster. So, unless you carry in the back or over on the side, that belt won't work for you. And, in my opinion, carrying right on your side in the 3 o'clock position is hard to conceal.

I have a belt like this and I love it, but I only WEAR IT when I'm taking a class or shooting competition and I'm carrying openly. Then I wear my gun on the side and the belt is fine.

Margie wanted me to point out that for women who are carrying openly, at a class or competition or whatever, these thick nylon tactical belts are great because they are not slick like leather and the thickness of the belt helps keep the gun in place. Apparently, the gun dragging the belt out of the loops and crashing to the floor in the restroom is a definite possibility when women open carry.

How you carry may change with the seasons. In the winter, you may wear a nice thick jacket that makes it easy to carry with any method. In the summer, though, in shorts and a t-shirt, you may have to switch to inside the waistband. 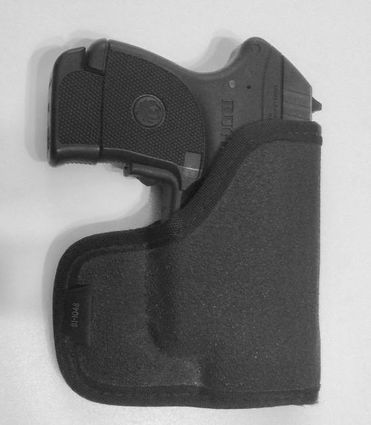 This is an outside-the-waistband holster that I use for classes and competition. They also make holsters like this with a retention clip so people can't come up and take your gun.

No matter what or how you carry, you absolutely must practice drawing from that holster. Get a blue gun (a plastic gun that has no mechanisms and can't be fired), and practice drawing it from the holster. You can get blue guns in the exact dimensions of almost any real pistol.

Pay Attention To These!

Also, pay attention to what you have to do to get to that gun. Do you have to rip some Velcro open? How much noise does that make? Do you have to undo a snap or two? Could you do that if you were terrified and facing an attacker? All of these things should be considered.

There are almost endless possibilities when it comes to Concealed Carry, and that's because people are different. Try a variety of methods and you're sure to find at least two or three ways to carry that you can be comfortable with.