It's Vital To Know The Laws

In the State of Arizona, it is legal to carry a concealed weapon whether you have a permit or not. It is also legal for visitors to do that. Open carry is also legal, and Arizona recognizes CCW's from all other states. That doesn't mean you can carry concealed everywhere without a permit, though.

Schools, government buildings, places where alcohol is consumed - these are just a few of the places where you can't carry. Does the store you're headed into have a "no guns" sign? Then you can't carry there. Find another store, or lock your gun in the car before you go in.

Why Have A CWW?

Since Arizona allows constitutional carry, why bother even having a CCW? For one thing, it means that in 37 other states, your Arizona Concealed Carry permit allows you to carry concealed there. Eight of those 37 states require a written agreement, however. With a Concealed Carry permit, you can skip the background check when you buy a firearm, and you are allowed to carry in a National Park, which you can't do without a permit. You can also carry your weapon in restaurants and other places that serve alcohol, as long as you yourself are not drinking alcohol.

In addition, you are not allowed to be carrying a weapon within 1000 feet of a school unless you have a CCW. That doesn't mean that you can carry on school property, but it does mean you are legal if you are walking down the sidewalk next to a school, or if you get pulled over in front of a school. However, laws have a tendency to change, and if you do decide to get a CCW, you still need to know the laws about Concealed Carry.

The Most Important Reason

The biggest reason to have a CCW, in my opinion, is to learn the laws about using deadly force and to learn to carry a weapon safely and responsibly. There have been many cases, even in Arizona, of people who believed they were justified in using their weapon in self defense, but a jury didn't agree. You need to take a CCW class to learn what to do and, even more importantly, what to say or not say, if you are ever in a situation that requires you to defend yourself or your loved ones.

Why do some states recognize your Arizona CCW and some don't? States, so far, have the power to legislate who is allowed to carry a gun in that state. If you look up "national CCW reciprocity" you will find a lot of different Web sites with a lot of different opinions. Many people believe that a national law allowing CCW holders to carry in any state is long overdue. Other people are terrified at the very idea of such a bill. Many people fear guns and honestly believe that they are safer without a gun - and they don't want you to have one either.

There have been many national reciprocity bills introduced in Congress, but so far none of them has come to anything. States' rights has a lot to do with this, but the States' Rights argument didn't stop the Supreme Court from mandating that all states recognize same-sex marriages.

In that case, the Court decided that individual state laws were denying some people a right that other people have. It could take a similar Supreme Court ruling for national reciprocity to become a reality. Meanwhile, it's up to you to know the law where you're going. Before you travel, look up the law in each state that you will pass through. The Arizona Department of Public Safety has a lot of information about reciprocity, and they urge you to contact each state before traveling. Find it here: http://www.azdps.gov/Services/Concealed_Weapons/Reciprocity/

Be especially aware of any Reservations that you will be traveling through. Information about the legality of carrying concealed on Reservation lands is very hard to come by, and incredibly vague. It's even hard to know if you're okay to carry even if you are simply passing through on a state or national highway.

You may be best off if you completely unload your weapon and lock it in a safe box, separate from the ammo. I found one Web site that has compiled data on Tribal Law and Concealed Carry, but that site also urges you to do further research. The site is http://www.handgunlaw.us/documents/tribal_law_ccw.pdf. 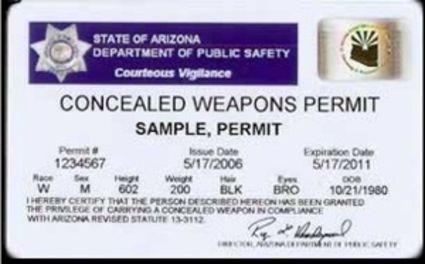 This is an Arizona concealed weapons permit.

I am a total believer in CCW permits and training. If you want to carry concealed, please do yourself a favor and take a CCW course. The courses don't cost that much, and it's worth your while to spend a day learning about the reality of carrying concealed. I took my permit class with the people at fast-az.com. They were great, and the course included firearms training as well as classroom teaching. They also have a "shoot/don't shoot" simulation at the end that is a real eye-opener. You have a laser pistol and watch as situations unfold, forcing you to make the decision.

You are allowed to carry concealed in Arizona without a permit, but a CCW class is something you really should invest in. Get some buddies and take the class together. You'll have a great time, and the training and knowledge you receive is invaluable.