What Size Pistol Should You Get? 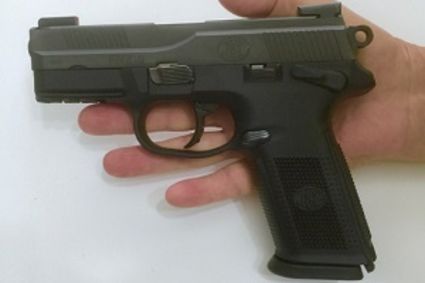 Here is a counter-intuitive truth: Small pistols are more difficult to handle, require a better (stronger) grip, and have a lot more recoil (kick) than larger pistols. Many smaller people make the mistake of thinking that since their hands are small, a smaller pistol is ideal.In many cases, the opposite is true. The same goes for buying that first pistol for your child - just because she has smaller hands doesn't mean you should buy her a small pistol.

My granddaughters both have full-size pistols and they both have small hands. If you're worried about recoil, go to a smaller caliber. My granddaughters' guns are .22 caliber, which is ideal for a beginner since

the recoil is negligible and the ammo is fairly inexpensive so they can practice a lot without getting worn out or breaking the bank.

One of the reasons why my granddaughters' .22 pistols are the right size for them to hold is that they are "single stack" semi-automatics. A semi-automatic means that one trigger pull equals one shot. A single stack means that the ammunition is stacked one on top of the other in the magazine, which means the magazine is thinner, and therefore, the grip of the gun can be thinner as well.

A double stack magazine has two rows of shells inside. This means that it can hold a lot more rounds, which means that you don't have to reload as often, but it also means that the grip needs to be wider to accommodate the magazines. The size of the ammo also makes a difference. Obviously, .22 ammo is much smaller in diameter than a 44 mag or even a 9 mm. So, you can still have a full-size pistol, just ask to see single-stack models or smaller calibers if your hands are small.

The size of your hands is not the only reason that you may have trouble with certain pistols. A weak grip makes it very hard for a semi automatic pistol to cycle, which means that spent shells may not eject properly, so the new round can't chamber. In other words, the gun will jam.

Margie bought a little Glock 42, which is a small pistol - pretty much a pocket pistol. The darn thing jammed on her constantly. In fact, it was so bad that she took it to the gunsmith at Shooters World to

have him check it out.

Turns out he couldn't get it to jam unless he held it with two fingers. In other words, even though she has been shooting since she was a kid, Margie was gripping that gun all wrong. Once she started to squeeze it with both hands and hold it out strongly, her jamming problems were completely gone.

The lesson here is this: If you have a weak grip or weak arms from arthritis, a muscle problem, whatever - you will be much better off with a full size pistol or a revolver.

Revolvers solve the problem completely, but you have to reload after every six shots, and even though you can get speed loaders, you still have to load them six shots at a time. (Wheel guns are actually available in 5-9 shot models, but most are still 6.) Revolvers also solve the problem of magazine releases that can be hard for smaller hands to reach, and difficult for weak hands to manipulate.

There are many things you can do to make a gun easier for you to grip and manipulate, even if you want a full size double stack and you have smaller hands. Some pistols (particularly 1911's), come with different sized grip panels to help you fit the gun to your hand. On some guns you can change the back panel to make the grip bigger or smaller. On a gun like a Glock which is what it is, you can always get magazine release extensions if you have a hard time reaching the catch, but it isn't very easy to change the grip itself - you'd have to hire someone to do that for you.

Although smaller guns are more unforgiving about a weak grip, even with a full-size semi auto, you need to make sure you have the proper grip and stance. If you have never shot before, go out to Ben Avery or go to Shooter's World or a place like that, and ask them to help you. Look up places near you that have classes for beginners. You will learn how to hold the gun, how to stand, proper grip, how to reload, etc. You should also learn how to safely clear a jam.

Ben Avery has both a Sure Shots introductory program and the Annie Oakley program. Ben Avery Sure Shots program open to all 16+ novice shooters and is held on the 1st and 3rd Thursday evening of each month. 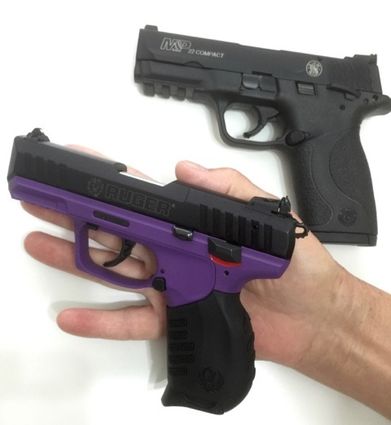 These are both full sized semi auto pistols in .22 caliber. The smaller caliber makes them easy to shoot and handle, and they both hold a full 10 rounds of ammo. They kick less and the ammunition is much cheaper than larger caliber ammo. These are my granddaughters' pistols and they both love them.

At Shooters World, they have what they call "First Shots" seminars. The price is $10, and the class is three hours. You'll learn the requirements for purchasing and owning a gun and you'll be introduced to

safe recreational use of guns. Then you'll get to put about 20 rounds through a .22 pistol. They even provide the eye and ear protection. You can register by calling either location. The Phoenix location at 28th Ave near