'And we will all be much worse off for it.' 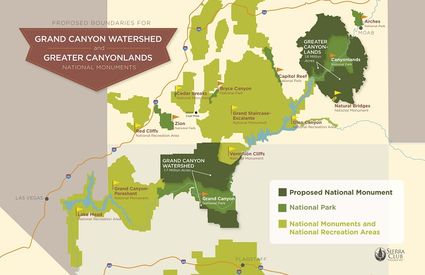 While the sportsmen and women of Arizona have been patiently waiting for draw results, certain organizations have been using their political clout to remove another massive chunk of real estate from the hunting communities' places to recreate. The following has been in process for a couple of years now, and it appears to be the proverbial train coming down the tracks with not much hope in sight.

Save It From What?

"Do You Want To Save The Grand Canyon?" That banner has been bandied about by such groups as The Sierra Club, The Wilderness Society and others. The sound of possible destruction of one of our most valued treasures brings out the protectionist in all of us. Save the Grand Canyon? Hell yes! But save it from what?

Therein lies the problem. For the past two years there has been a concerted effort by our not-so-friendly environmental groups to have current President Obama sign off 1.7 million acres of land around the Grand Canyon as "National Monument". What does that mean to all of us?

The Big Question: Why?

National Monument designation means a whole lot of things. It means road closures, it means massive reductions in any form of multi use by the public, it means cattle ranching on current grazing allotments could be eliminated. It means that conservation groups will become subject to massive amounts of paperwork filings within the Federal Government for approvals of worthwhile projects for Wildlife. The big question is "Why"?

If you follow the trail of deceit by the environmental community, you will see that their agenda always comes before the truth. A couple of years ago the Sierra Club continuously harped about how over 70 percent of Arizonans wanted wolves on the landscape.

It did not take long to figure out that the survey that was performed was totally biased, that they only interviewed a few hundred voters in Arizona out of over 6.5 million residents and that the survey was performed by a California group with ties to the leftist groups of the world. Somehow that "survey" became their battle cry. Even the Arizona Republic used it in support of the Mexican gray wolf program.

Enter 2014 and the environmental community has stated on many occasions that we need to protect out natural resources from the evil villains such as bloodthirsty hunters, welfare ranchers, timber barons who scalp the forests to nubs and the dreaded off -road vehicles that created thousands of miles of trails on our public lands. How do they stop what they perceive as wanton use of our natural resources?

Publish a scare tactic about wanting to protect the Grand Canyon from mining and how it will destroy our water supply. Guess what? There is currently a twenty-year moratorium on mining around the Grand Canyon. We are in year four of that moratorium. But hey, throw in the terms "pollution", "damage to our natural resources" and presto, we have concerns.

Then, hire another firm from California. This time it was the company Fairbanks, Maslin, Maullin and Metz. They are "specialists in public policy opinion research". Care to guess who some of their clients are? The Sierra Club, Tree People, The Wilderness Society. Are you catching the drift here?

With A Brief Stroke Of His Pen

The survey they did found that over 80 percent of Arizonans wanted to have the Grand Canyon Nation Monument designation attached to 1.7 million acres of land. How do they get that designation? Enter the King... sorry, President Obama. As his second term winds down, before he leaves office, he can designate certain areas of land as "National Monument" for the protection of areas that he deems necessary under the "Antiquities Act".

The President does not have to get any approval from anyone to do so. With a brief use of his pen, he can sign off whatever he wants to for this basic closure of large chunks of land. In fairness, there is supposed to be local support for this move. Enter the "survey" which states that 80 percent of Arizonans want it. Really? How can 500 people being interviewed with unknown questions that are typically misleading make a fair and accurate assessment?

They Can't; They Didn't

They can't - and they didn't. So folks, some 500 residents of Arizona now totally represent you to the President as he prepares to leave office. Coincidentally, citizens in Utah are also facing the same situation with over 1.9 million acres being designated as "National Monument" in the area known as "bears Ears".

Does this seem like a movement to you? It should. !.7 million acres here, 1.9 million acres there and sooner or later you are starting to talk some serious land grabs by the Federal government with Draconian rules regarding land use.

They have the money, the zealots who want humans off the land, and the dreams of having a contiguous corridor from Mexico to the Yukon where nature is lived without human intervention.

Be Prepared For The Consequences 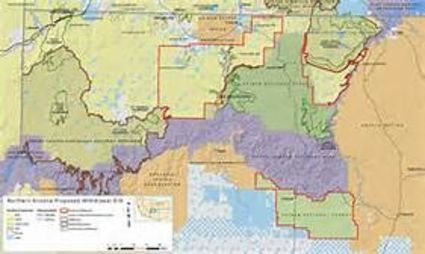 If this is your idea of how the country should be, then by all means encourage the President to sign off on both "National Monuments" - but be prepared for the consequences and restrictions that will ultimately follow.

For myself, I would like to know what Arizona residents really think. I would like to let them have all of the facts and then make a decision. I want an unbiased survey to take place.

Sadly, the train is upon us with little hope. Mark my words, early next year there will be a little ceremony at the El Tovar Lodge where former President Obama will sign off 1.7 million acres of land to Monument Designation. And we will all be much worse off for it.