Step Up Your Shooting Game 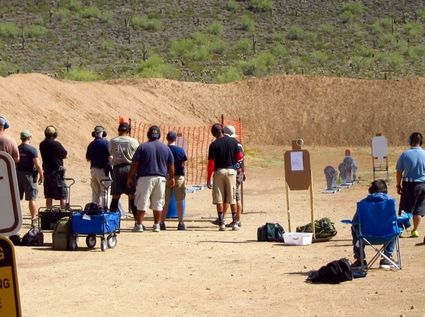 #1 At this station the shooter would start from behind the screen, move left and shoot those targets down, then move right and shoot down the ones on the right. They are steel targets that fall over when you hit them. Major rule: no one except the guy who is going to be doing the shooting has a loaded gun.

Even if you bought a pistol purely for self-defense purposes, you need to practice with it often. For one thing, you need to develop muscle memory. Muscle memory comes after you've done a movement so often that you can totally zone out and your body still performs the movement flawlessly.

With guns, safety should always be your very first priority, and becoming completely familiar and competent with your pistol is one of the keys to staying safe. Of course, you don't want to get so familiar that you start to get slack with your gun. I've been around guns almost my whole life, and yet I never relax my guard around them.

The Four Rules Of Guns

The four rules of guns should be upmost in your mind every single time you touch a firearm or are even around them. In case you need a refresher, here they are:

1. All guns are always loaded. Treat them that way.

3. Keep your finger off the trigger until your sights are on target and you've made the decision to shoot.

One of the best ways to get to be a better and safer shooter is to take a class. Margie and I and our son David have taken several classes now at Shooters World, including Defensive Pistol 1 and Defensive Pistol 2. Why is a class so great? For one thing, your instructors will keep your mind on safety at all times. They will drill safety into your head like a mantra, and that's a very good thing. Also, shooting classes are just plain fun.

When you go shooting at a range, you are limited to standing in the same spot and shooting at paper targets. You can move the targets closer or farther away, but that's about it. There are some steel target ranges, but you are still limited for the most part to being stationary yourself and having stationary targets as well.

In our Defensive Pistol 1 class we stayed at the indoor range at Shooters World. This isn't usually how it works, but for some reason the Ben Avery range wasn't available. It was still awesome.

Some of the things we learned are things that are always going to come in handy when you're shooting - like clearing a malfunction, reloading, proper sighting, trigger pull, stance, etc. They also put us under a bit of pressure by using a timer on us. This isn't like the pressure you would be under if you were a police officer facing an armed suspect, but even the small amount of tension the timer created was enough to make most of us screw up a little here and there - miss the target, have a bad grip - things like that. It really lets you know how important muscle memory is.

Defensive Pistol 2 was held at Ben Avery in one of the Practical Pistol ranges and it was an absolute blast. We learned tactical vs. administrative reloading and we got to practice reloading while walking forward, backward, and sideways, shooting at steel targets the whole time.

We also practiced shooting from cover and even learned how to do a one-handed reload with our weak arm. Let me tell you, shooting while moving and reloading on the move is a whole lot different from standing in a shooting bay banging away at a piece of paper. Those steel targets are great - that ping gives you instant feedback and lets you know immediately if you've hit the target. This was an all-day class and it was worth every dime. Highly recommended.

This kind of shooting just can't be done at a conventional shooting range. For one thing, it isn't safe to just let people walk around shooting at whatever they want while they're on the move. In a class, you take turns and the instructor is right there watching you and coaching you, keeping everyone safe.

You could always buy some steel targets yourself and set them up out in the desert somewhere, but I know from experience that it's getting harder and harder to find a place to shoot. Everywhere seems to be posted nowadays and those places that aren't are crowded. Plus, have you priced steel targets? Yikes!

A better alternative is to find a shooting club. We went to Ben Avery one Sunday morning to watch the First Sunday USPSA Match of the Cactus Combat Match League and it's absolutely awesome. First off, I had a bit of an email chat with the president of the club, and he assured me that the matches were for people of all skill levels. Apparently the Thursday night matches are more geared toward beginning shooters, but the one we watched on Sunday morning looked like a ton of fun. Everyone we talked to was really friendly, and Jay Webb took us under his wing and showed us around.

On this particular day there were six stations and each one featured different target set-ups. There was a variety of targets - steel, cardboard, moving targets, etc. On some stations you'd shoot the targets in one area, then hurry to the next spot and shoot more targets. On one you got to shoot through a big piece of PVC pipe, as if you were shooting through a small tunnel.

A Sport Anyone Can Enjoy

We saw men, women, kids, older folks - it's a sport anyone can enjoy. Webb explained that your score is figured by speed and accuracy combined. His goal (and mine) is to do better than he did last time. It's not so much about winning as it is about getting to be a better shooter.

There are all different kinds of shoots - the one we observed was called a USPSA Shoot and it follows the rulebook of the United States Pistol Shooting Association. You can visit the cactusmatch.com Web site and find a place to download the rule book, plus learn about the club.

They also hold Third Sunday Steel Challenge shoots, 4th Sunday 3Gun Nation Matches, and Thursday Night practice matches. The great thing about these matches is that you get to practice a variety of shots. In some you'll be moving. In some the target will be moving. In others, you and the target are stationary. But, you'll always have that little bit of tension knowing that you're earning a score, and that will push you to be better.

A Safe Way To Practice

This is also a very safe way to practice a variety of shooting situations. There are Range Officers at every station making sure that both shooter and spectators remain safe and it's set up to give you practical situations. Rule 7 of the USPSA rule book says "Practical competition is diverse, never permitting unrealistic specialization of either technique or equipment. Problems are constantly changed."

Rule 2 states "Accuracy, power and speed are the equivalent elements of practical shooting and practical competition must be conducted in such a way as to evaluate these elements equally.' In other words, the shoots are designed not just to test you, but to help you improve your shooting in a variety of situations. 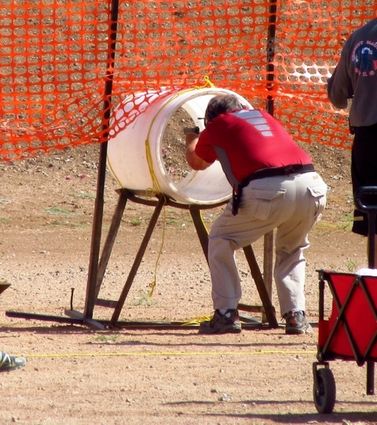 #2 The different stations each involve different shooting scenarios, and they all look like fun!

See You At The Range!

Webb told us that if you wanted to, you could shoot a match five times a week. They are very popular, so odds are there is a club in your neck of the woods that holds shoots regularly and would welcome you. At the Cactus Combat matches, you don't have to be a member to shoot. Show up, attend the new shooters meeting, and they'll give you a mentor to show you the ropes and make sure you have a great time. The match fee on Thursday night is $15 for members, $17 for non-members. Juniors shoot for $1. You'll need a pistol (see the rulebook for allowable weapons), 80-100 rounds of ammo, and 3-4 magazines with speed loaders.

I want to encourage you to visit their Web site (cactusmatch.com), or look for a club near you. See you at the range!