Why Take A Gun Class?

There's More To Shooting Than Just Pulling The Trigger

If you're like a lot of shooters, you probably think that taking a gun class is a waste of time and money. After all, there's not much to it - you just aim and pull the trigger, right? That might be okay if all you want to do is go put a few holes in a piece of paper, but what if you decide you want to step up your game?

Target shooting is fun, but at some point you may want to get better, and that usually means taking a class.

Even For The Seasoned Shooters

I've been shooting for decades, and I fancy myself a pretty good shot, but I signed up for a Defensive Pistol 1 course at Shooters World with Margie and our boy David. The three of us had no idea what to expect, and we were pleasantly surprised that not only did we have a lot of fun, but also we all learned quite a bit, even though all three of us are seasoned shooters and hold CCW cards.

Of course, the class started with a ton of safety reminders, which everyone needs, regardless of how long you've been shooting. In fact, I think safety is even more important to stress around long-time shooters because they have a tendency to get complacent.

They've been around guns for so long and for so often that they might get sloppy, whereas beginners still have that tinge of fear around firearms that makes them very careful. It never pays to get complacent around guns.

Even Skilled Shooters May Have Bad Habits

Most long-time shooters have some bad habits that they may not even be aware of. There are many mistakes to be made in grip, trigger pull, aim, and follow-through. Margie has been shooting since she was a small kid, but she found out she has a bad habit with her grip - folding the thumb on her non-dominant hand around the back of the gun. You can lose some flesh that way! A good grip does more than keep your fingers safe – it makes you a more accurate shooter.

A good grip and a good stance are crucial for controlled shooting. A class will help you identify any bad habits and the instructors can tell you why they're bad and how to fix them.

If you're a beginner, you need to take a beginner class. These can be found at Ben Avery, Shooter's World, and many other gun stores and ranges. Just Google it and you'll find one near you. You will be able to learn how to load a gun, clear a malfunction, aim properly, how to hold a gun, and how to stand - all in a safe environment.

This is a great thing to do with your kids. Even if they won't take advice from you, odds are they'll take it from the 40-year veteran or the guy with a police background who is teaching the class.

Our class was a bit more advanced, and I learned a lot. We shot at many different distances and learned how skewing your sight picture affects your shooting. We were taught the best and safest way to clear a malfunction. We also learned the four steps to drawing your gun and how to draw and replace the gun in the holster safely.

Speaking of holsters, we also learned the best and worst types of holsters to buy, and the best kind of magazine holders to use.

It was a little nerve-wracking at first, especially when you're shooting in front of the class, but after the first time, everyone calmed down and there was a great camaraderie among us. The class was small - only seven of us, so we each got a lot of one-on-one with the teachers, which was very helpful. There was just enough competition involved to keep it interesting.

The class was an all-day event: nine to five, so we all had a lot of shooting and instruction. During our lunch break the three of us all talked about how much fun we were having and discussed which class we would sign up for next. 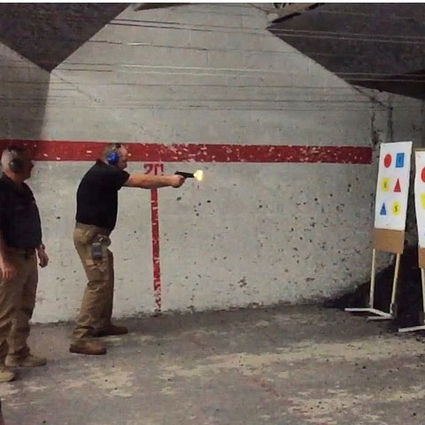 UP CLOSE – Participants got to do some close-range shooting.

Our instructors both had years and years of experience in the police and/or military, and they were extremely knowledgeable, but not at all intimidating or overbearing. This is not a boot-camp kind of experience. Your teachers will be people who really enjoy shooting and want to help you have fun with it and be better at it.

Many Types Of Classes

You may be surprised at how many different classes there are out there – for beginners, for women, for kids, for everyone. The money you pay for a shooting class is a great investment in your safety, plus you'll have a great time. Visit the Ben Avery Range or your local indoor range and find out what kinds of programs they offer. You'll have a blast.