SB1361 A Solution To A Major Problem!

Every year the State of Arizona convenes the legislature in January and all kinds of bills pop up. Some are ludicrous (just ask Representative Townsend) and some are a response to critical problems. This year the Arizona Game & Fish Department has been pushing for SB1361 to be approved.

What is SB1361 and why are a few select former commissioners screaming?

Back in 1990, The Heritage Fund (Indian gaming monies) awarded an annual amount of $10 million dollars to the Arizona Game and Fish Department to purchase sensitive habitat for threatened and endangered species. For awhile those monies did exactly what they were supposed to do and the Game & Fish Department - under the guidance of the Arizona Game & Fish Commission - has purchased a number of properties.

Now There Is A Problem

For a brief period of time, the system worked well. Now, however, it has become very obvious that there is a problem. There is no language in the statute that allows for the Heritage monies to be spent on O & M (operation and maintenance).

During the past year, there were several meetings where a lot of concerned people from all walks of the outdoor community tried to find a solution to the lack of funding for operation and maintenance. That group could never arrive at a consensus on how to pay for these properties.

For those who need a little primer on this, consider, if you will, purchasing a new car. If you had $25,000 to spend on the car and it indeed cost exactly $25,000, it sounds great.

You can never buy a vehicle, drive it daily and never consider replacing tires, doing an oil change or any other form of maintenance. Well, I guess you could if you wanted to destroy the vehicle in no time flat.

Currently the Arizona Game & Fish Department is forced to pay for the operation and maintenance for these properties out of ... you guessed it. Sportsmen's dollars have become the checking account that pays the bills. So now, instead of worthy projects that benefit Wildlife or hunting and fishing, our money is being spent on the properties that the Heritage Fund has purchased.

SB1361 would allow the Arizona Game & Fish Department to spend up to 20 percent of the Heritage acquisition monies for operation and maintenance of these properties. It makes perfect sense - unless your name is Beth Wooden, Bill McLean or Bob Hernbrode.

These former commissioners are in a tizzy because they feel the money should not be touched and that no consensus had been arrived at by the working group. Well, I'm sorry Beth, Bill and Bob, but your lack of finding a solution does not mean that time stands still. These former commissioners have a habit of siding with the Sierra Club and other groups that have a Tucson influence.

Former Commissioner Hernbrode has for years paraded out a "Watchable Wildlife" license idea, which has been met with a deafening amount of silence from the general public.

A Bonus For The Public

Quite frankly, the Arizona general public that does not hunt or fish should always thank their lucky stars that hunters and fisherman exist. Since the general public does not pay a single dime of support to the Arizona Game & Fish Department, any Wildlife they see is a bonus to them. No taxpayer dollars are spent by the Arizona Game & Fish Department. Through Federal self-imposed taxes on hunting and fishing equipment as well as state licenses and tags, the sportsmen pay for the Department. 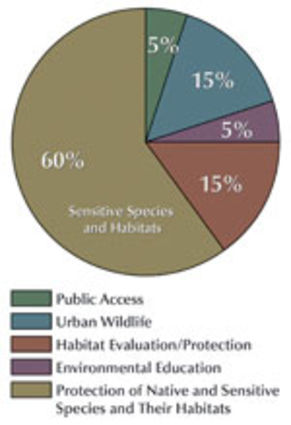 SB1361 is a good solution to a problem that will only become a more onerous burden as time passes. The shame of it is that Beth, Bill and Bob still keep trying to be commissioners after their day in the sun is long over. The current commissioners reached out to many groups for a solution. No one had anything remotely close to a good idea.

It's time to back SB1361 and get on with maintaining these properties but no longer out of sportsmen's dollars.