I review hundreds of products over the course of the year and few have the "WOW" factor this one does.

In today's society, personal security is on everyone's mind. Choosing a hand gun for personal protection certainly is a matter of individual choice, and I personally choose the Colt Combat Elite Series 80, 1911 .45ACP. One problem, though, with the Colt 1911 and other quality hand guns is they don't have a factor rail system for the addition of lights and lasers.

Being a regular customer at Lookout Mountain Outdoors, 17232 N. Cave Creek Road for my gun and shooting needs, in Phoenix, owner Joe Notcha turned me on to this high-tech, custom-made, rail-laser- flash assembly for my 1911.

The RAMLITE for my Colt 1911 was made specifically for my hand gun in two days! It has a high capacity magnet in the housing and has a precision fit on the bottom of my stainless frame. No assembly required. The unit comes with a red laser and a three-position flashlight up to 500 lumens.

My next stop was Ben Avery Shooting Range to dial it in and get zeroed. The laser I found was easily zeroed to my irons sights, three shots. So then I'm thinking, when I take the unit off and put back on, I would have to zero it again. Nope. I was amazed the laser remained zeroed after multiple removals and installs. The accuracy is amazing.

With the addition of the RAMLITE on my personal weapon of choice, I have the confidence to use it in tight quarters on security details or home and for personal protection situations. I know precisely what and where my bullet is going hit, no question. Shooting with confidence is paramount.

Another key feature is that the three-position flashlight remains on the level you have chosen is an intricate part of the assembly. When you hear a noise in the middle of the night, it alleviates the question, "Damn, where's my flashlight?" It seems like my handgun and flashlight are never in the same place at the same time.

RAMLITE (formerly Ariete) was founded by Ron Freimark, a retired engineer and physicist. Freimark is an avid collector of firearms and realized there had been no improvements to the Colt 1911 since the year it was made (you guessed it, 1911). He wanted to invent a way to attach lasers and lights to his pistol without going through the hassle and investment of visiting a gunsmith.

Also, he didn't want to permanently alter his firearm. Through lots of trial and error he came up with the first improvement to the Colt 1911 in over 100 years! Freimark is owner of the company and he continues to create innovative designs.

He lives in Scottsdale, Ariz., with his wife, two collie dogs and his 1911. They have two daughters and six grandchildren.

In 2011, Freimark approached his friend, Dan Hotchin, about joining the company to expand the product range and assist with marketing. Hotchin quickly became the "hands-on" guy needed to create prototypes and test new designs. He does all the powder coating, folding and quality control inspections. Seriously, he inspects every product before it gets shipped to you!

Hotchin was born in South Africa and raised in London. He currently lives with his American wife in Phoenix, Ariz.

Jeremy Holmes is the newest member of the team. He has been given the title of "Top Laser Sight Technician". He is the assembly guy. Holmes isn't afraid to get his hands dirty; he often steps in to smooth out rough edges on metal, prepare parts for powder coating or any other job put before him. He specializes in the VZ58 products. 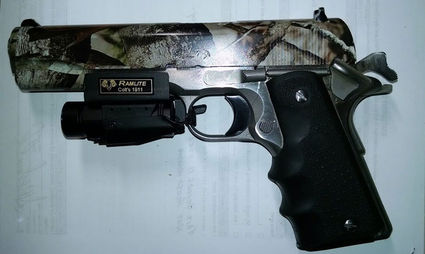 Every product RAMLITE sells is produced in Phoenix, Ariz., and made with their own hands. They are a small company with few people doing lots of work. They work 12-14 hour days (including weekends) to ensure you get a quality product at a fair price. While others in the industry have doubled or even tripled their prices over the last few years, they have kept costs down and have not artificially raised their prices.

The RAMLITE is available for your personal hand gun at Lookout Mountain Outdoors. Talk to Joe Notcha and he'll get you fitted with a custom RAMLITE unit, if not in stock, in less than three days.

Know where you bullet goes; I'm Don McDowell and I use and endorse the RAMLITE.