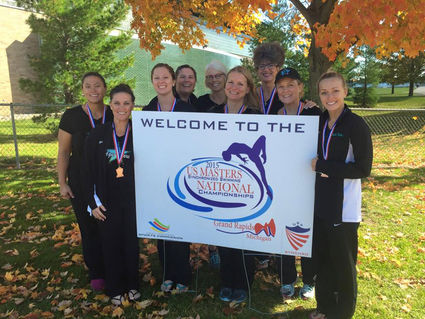 • Katie LaBounty (Chandler) won a gold medal and the top figure award of the entire competition and is now the 2015 Figure Champion in the 20-29 age group. LaBounty also wowed the judges and audience with a beautiful solo performance that got her the silver medal.

• Laurie Stiff (Mesa), who joined the team five years ago, won the bronze medal in the 50-59 Age Group categories.

• Julie Johnson (Gilbert), Deborah Anderson (Phoenix) and Laurie Stiff (Mesa), who swam a trio to a compilation from Davina and the Vagabonds in the 50-59 age group, took the bronze medal. "We were thrilled at their performance. I couldn't be more proud of them. The teammates had never performed together before. Our newest member, Julie Johnson, has only been swimming since March," saidCoach Becky Thompson.

• In the team competition, a team of eight swam to a medley of evil villains and queens from popular Disney movies. Their free-routine performance, known as "Evil Queens," placed second in the nation in the 30-39 age group. "Combining their score between the technical routine and free routine landed them the bronze medal and the highest final score they have ever received," explained Thompson.