Columnist Bryan Hughes shares some thoughts about the mechanics of watersports and some influential waterskiiers he admires. 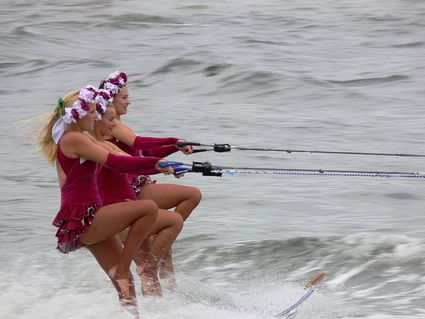 It's All Just Science

Sometimes we take for granted all of the science and engineering that goes into the watersports we love. Whether it's the way our skis or wakeboards are shaped, the variables that affect our boat waves, or even how our boat hull, engine, and instruments come together - we are riding on the backs of years upon years of research and development all dedicated to giving us the best riding experience.

As much as I dislike science classes, there is no doubt in my mind that taking the time to understand the various anatomic makeup of our watersports tools can help us become better riders.

So, next time you are riding in the water, look down at what's under your feet and think about the shape and the contours and all of the variables that came together to put you in your riding position. It's a sobering thought, but the illumination it can provide to your riding skills is limitless.

The Five Most Important People In Waterskiing History

These are the players who made watersports what they are today.

Waterskiing would not be the sport it is today if it weren't for a few key players contributing to its success. Ever since the sport's inception in 1922, it has continued to evolve and grow and it's all thanks to a few great people who would not settle for status quo. These five people in history have single handedly paved the way for all of us to enjoy this sport the way we do today.

It didn't take long for waterski jumping to catch on, and the bar quickly kept growing. The first ski jump record clocked in at 49 feet and was set by a man named Chuck Sligh. His record stayed for a while, but it was soon broken.

Then finally in 1954, a man named Warren Witherall broke the ultimate bar by jumping over a hundred feet. Unfortunately, his record was broken by 102 and then 104 feet at the exact same event. However, Warren will still go down in history for being the first person to break the 100-foot barrier.

No, I'm not talking about the horror-movie villain; I'm talking about the Illinois born Freddy Kreuger who holds the current world record for waterski jumping. Yes, Krueger has set and beat his own record a few times but the bar is currently set at 250 feet. He will continue to push the sport as he still strives to keep beating his own record.

His record stood for years until Nate Smith was finally able to break it. Even so, Mapple's long-standing legacy of skiing excellence makes him a worthy person to go down in waterski history. In 2005, Mapple retired from competition skiing for good.

Herb O'Brien is undoubtedly the godfather of waterskiing. Suffice to say, no single person has done more to progress the sport than O'Brien. Ralph Samuelson may have invented waterskiing, but O'Brien reinvented it. He completely innovated the shape of modern slalom skis.

In his relentless pursuit of perfection, he started three very influential waterski companies, all of which are still wildly successful and he even inspired one of the greatest wakeboard companies, Ronix, which is currently run by his son. Sadly, O'Brien passed away in 2012 but his impact on the sport will remain forever.

The Future Of Waterskiing

This list isn't meant to negate all of the other amazing people who have made this sport what it is today. However, these five are the standout players in the history of waterskiing.

As a sport that is less than a century old, waterskiing will still continue to grow and evolve. Perhaps the next greatest waterskier hasn't even been born yet. Regardless, it's important to remember where we came from, and these five riders remind us where we were and where we are going.