Wake Zone: 'In My Opinion'

Endangered? Really? Please Think About This!

William “Billy” Edwards went to work last month, just as he has done every day for the past 25 years. He followed in his father’s footsteps as a computer consultant.

His father was one of the pioneers of the industry, dating back to the 1950s when he worked for General Electric as a Mainframe Analyst. Billy had been part of the “Mac” revolution and had done some promising work on applications for the old Macintosh as well as the newer generations. Providing applications that helped the machines work more efficiently and with more power had been one of his life’s goals.

A Letter From The Feds

When Billy arrived at his office, he found a letter from the federal government that stated that all of his new work would be subject to a review by a team of physical-education experts who would be looking to see if any of these new applications contributed to the obesity factor in Americans today. Furthermore, Billy’s past work would be evaluated by a new group to see if what he had created “contributed to a less physical lifestyle.”

Billy was stunned to read the letter and immediately began calling to find out what was happening and, more specifically, why. Calling the federal government turned out to be a huge amount of time, energy and wasted hours. Each department he contacted pointed to another and no one could give him the answers he was looking for.

Billy then turned to the Internet and was appalled at what he found. Under a remote section called “Citizens for Healthy Children,” he found that they had employed lobbyists who had convinced some rural western legislators to pass some legislation as a rider to a bill that was important to enough congressmen and the bill had passed.

The bill specified that all of Billy’s work had to be authenticated and then approved by the CHC group. When Billy called the CHC, he found that the group was backed up with requests and that his work would be placed in the line as it came in. The turnaround time would be approximately 9 months. Until the work was approved, he could not move forward with any other software. Billy recognized very quickly that life as he knew it was over.

Does the above sound far fetched? It is happening on a consistent basis to rural America every day. Farmers, ranchers, timber people and others are being slowly, yet very effectively, removed from the land by urban voters who have no concept of what they are doing.

The Endangered Species Act, which sounded like a great idea in 1973, has become the personal financial playground of groups like the Center for Biological Diversity. Did you know that Arizona has more listed endangered species than any other state? Care to guess why? Yep, down in Tucson, the corporate housing for the Center for Biological Diversity lives and thrives.

With the passing of the “Equal Access to Justice Act” in 1984, the financial windfall began for the CBD. Time and again, they have filed lawsuits against the federal government and won. The beauty of the Equal Access to Justice Act is that even if you do not win, you will probably get your attorneys’ fees paid. It’s like going to a casino and getting back all the money you gambled if you loose.

With all of the species that are getting listed and all of the dollars that are flowing into the CBD coffers, they have reached out through smart use of technology to the massive uninformed public for more money. They make claims that say things like” Ranchers need to get off public lands” or “Hunters are killing all of the wolves on the Endangered Species list, please donate $50 and we will fight for the protection of these adorable creatures.” The uniformed and peace-loving public wants to support these adorable creatures, right?

Sadly, we find each passing day that an overreaching federal government is placing rural Americans at risk. Last month, the United States Fish and Wildlife team told a group of ranchers in Young, Ariz., that they had determined there were eight sites that were suitable for re-introduction of the Mexican gray wolf.

There has never been a pack of wolves that has moved out of elk country to thrive on mule deer or Coues deer, but with each passing year, the Endangered Species Act is placing more and more land available for animals such as the Mexican gray wolf. How does this scenario affect ranchers?

Consider The Cattle, The Ranchers

As any business, ranchers provide cattle for sale to the public. Those quarter pounders do actually come from an animal! If a wolf pack sets up residence in your grazing allotment, the odds are pretty high that you are going to lose some calves along the way. They have also found that cattle that are being harassed by wolves tend not to get pregnant, or worse, abort their fetuses.

Then, when you take what animals you do have to market, you notice that their weight has dropped considerably since they spend half their time moving to avoid wolves.

The bottom line is that ranchers have never been extremely wealthy. They live a difficult and hard life raising cattle. To plant an animal that thrives on your product for market makes absolutely no sense. Yet, each year, groups like the Center for Biological Diversity, the Sierra Club and Wild Earth Guardians are making sure that their pet animals get the five-star treatment and who cares that one of the oldest and most respected ways of earning a living off the land gets driven to oblivion?

Destroying A Way Of Life 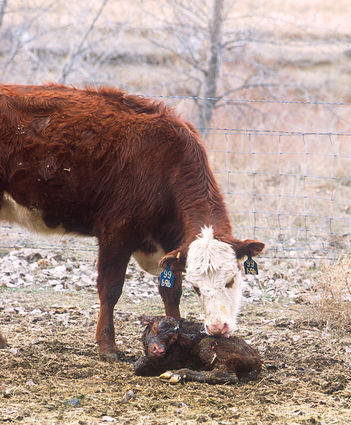 Hereford Cow And Her Calf

Oh by the way, the Endangered Species Act has over 2,000 plants and animals listed in the United States alone. Would you care to guess how many have “recovered”? Less than 2 percent of all animals and plants listed under the ESA have “recovered.”

That represents what most would call an abject lesson in futility but hey, it’s only your billions in tax dollars attempting to save the narrow-nosed garter snake! A billion here, a billion there and sooner or later you start talking some serious money.

I hope that some will read this and become a little more aware of the dangers of the political machinery that is in motion to destroy rural America. What would you do if the only way of life you have ever known was suddenly ripped away from you? Please think about it!