With winds exceeding 300kph, Pacific Hurricane Patricia travelled north of Guadalajara as it weakened and fortunately Cancun has escaped the destruction of the storm. The weather forecast for the remainder of the Wakeboard World Championships week will just see some scattered thunderstorms and temperatures remaining comfortable at 29C / 85F.

With official practice fully completed on Monday, the first battle for Finals places will kick off in earnest on Wednesday at 09.00hrs with the Open Men Qualifying Round. Chief Judge Loren Levine (USA) has assembled an international team of iwwf officials from Argentina, Australia, Belgium, Brazil, Colombia, Great Britain, Ireland, Italy, Japan, Republic of Korea, Netherlands, Mexico and USA.

With a cash prize at stake of US$50,000, and based on the extraordinary recent performances at World Cup Stops, the level of competition at this iwwf Wakeboard World Championships is expected to be exceptional. 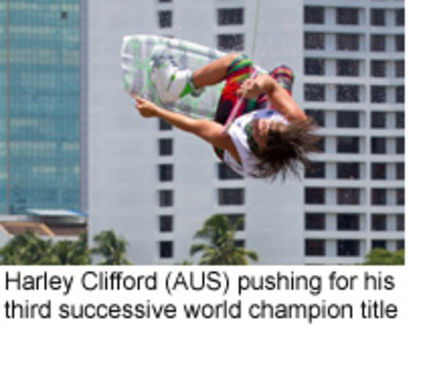 In 2011 the Wakeboard World Championships were staged in Milan, Italy. Harley Clifford (AUS) and Raimi Merritt (USA) took home the Open titles of iwwf World Champion on that occasion. In 2013, in Busan in the Republic of Korea, yet again, Harley Clifford and Raimi Merritt made it a double victory once more. Can they do the impossible here in Cancun's Mayan Watersports Complex? It will be a very exciting challenge. Watch out also for the 2013 Juniors who have since progressed – Noah Flegel (USA) and Georgia Gregorio (ITA). A fascinating week lies ahead for all Wakeboard fans around the world. The results will be available LIVE throughout at :

MasterCraft will once again provide the world renowned XStar competition boats and full technical support. They have also provided the boats for the highly successful World Cup Series from its inception in 2004.