Note: As press time occurred before the event, we can only assume and hope that Klarich was successful (and wish him a very Happy 50th Birthday!).

CANYON LAKE, Calif. - There are a lot of different ways people celebrate their 50th birthdays, but water skier extraordinaire, Tony Klarich, did something that's never been done before. He planned to attempt to ski/ride on 50 different objects in a single day.

Klarich is no amateur when it comes to incredible feats on-the-water. He is a 10-time National and World Champion on a kneeboard, wakeboard, and hydrofoil, but in recent years has become known as the guy who rides and skis on everything - picnic tables, beverage coolers, oars, suitcases, pallets, skateboards, bicycles, etc.

In fact, Klarich planned to put his skills to an extreme test on Saturday, Aug. 22, 2015 at the Long Beach Marine Stadium in Southern California from 8 a.m. to 6 p.m. to celebrate his 50th birthday.

Although Guinness World Records has declined to certify the feat, Klarich planned to ski on their book as a tongue-in-cheek protest. Several other official records were scheduled to be attempted that day, however, including the longest chain of skiers, most riders on different things behind one boat (representing the nine-sport discipline of USA Water Ski, the governing national organization of towed watersports) and an attempt by Klarich's uncle Mike Murphy at the world's tallest hydrofoil (11′4″, and an official Guinness World Record attempt).

Never before has so much water skiing history been demonstrated in one day. From the early 1900s to the 2000s and beyond, Klarich and his friends were representing almost every aspect of towed watersports through the years.

The day was organized into six acts that included a History of Wakeboarding, History of Hydrofoiling, Wooden Wonders, and more. The day promised to be both entertaining and educational, featuring vintage rides like a 1932 Aquaplane, 1958 Double Acts from Cypress Gardens, Florida and a ride on the first wakeboard - the 1991 HO Hyperlite. Many of the rides were costumed to their time periods.

In between acts, several of the world's best skiers and wakeboarders demonstrated towed watersports at its highest skill levels.

The event was free (no admission charge) and open to the public to enjoy. The "50 for 50" day on August 22 supported and collected donations for Boys Town California, a 501C-3 non-profit charity helping troubled children and families in Southern California. 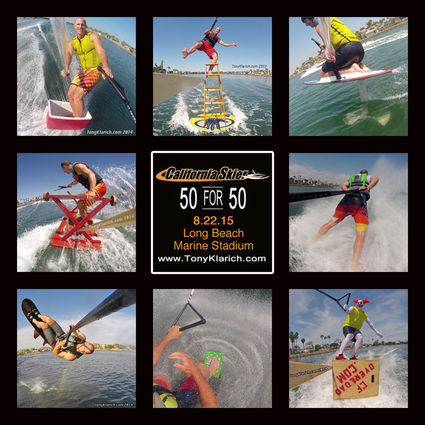 Editor’s Note: It was a great day at Marine Stadium -- Tony did all 50 rides! All this was in super weather, and about 500-600 people came down to watch. (Update courtesy of Bob Brown, Media Direction)