Target Shooting Is Fun, But Only If You Put Safety First 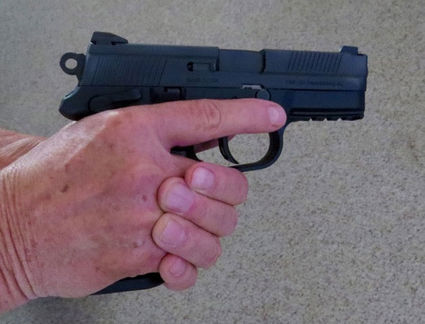 Hold pistol firmly, pushing slightly with dominant hand and pulling with the other so gun doesn't way when you fire.

Target shooting is a sport that a lot of families enjoy, but let's face it - the thrill soon wears off if you shoot poorly.

I see it all the time on social media: People post "went shooting with the family, but didn't hit anything – LOL!". Odds are, they weren't actually laughing out loud when they continued to miss time after time.

The photos they post usually tell the story: They're holding a pistol with arms stretched straight out ahead, their feet are together, and the top half of their body is bent backwards so they look like a letter "C". It's a shame there is no one there to coach them, because anyone can shoot accurately.

It all starts with stance. There are two schools of thought on this, but in both cases, your feet should be shoulder width apart. Some people like to shoot with their feet side by side; some like one foot or the other out slightly in front. Whatever makes you comfortable is the right stance for you.

Your knees should be slightly bent, and so should your arms. Look at the photos to see how you should be holding the pistol in your hands.

You should have just the pad of your index finger on the trigger, and you don't pull the trigger - you squeeze it. There are also differences of opinion about breathing while shooting. Should you hold your breath? Should you squeeze off the round while you are inhaling? Exhaling?

Well, if you are into marksmanship contests, you are probably not reading this. I'm writing to people who just want to have some fun plinking with the family. My dad always taught me to squeeze the trigger while I was exhaling, and to pause my breathing for a split second when the shot goes off. It works for me.

Something else might work for you. Just try to get into the habit of shooting the same way every time.

Most of the time, new shooters miss because they are closing their eyes (seriously!), or they jerk because they are anticipating recoil. If you are an absolute beginner, get your stance and your hold right, then fire the pistol a few times without really trying to hit the center of the target. Just get used to how it feels so you won't get scared and flinch when the gun goes off.

So here we go. Feet shoulder width apart. One foot a bit forward or feet side by side. Your choice. Knees slightly bent. You should be leaning slightly forward at the waist, and the gun should be held firmly in your hands.

Look at the photos to see how to grasp the pistol. You should be pushing the gun with your dominant hand and pulling it with the other. Breathe deeply a few times, line up the sights, and squeeze the trigger. Keep your eyes open!

How To See The Sights And Target

Look at the photos to see how it should look to you when you pull the trigger. Most of the time you'll be lining up the sights and you'll want the target directly on top of the front sight.

Some sights you'll cover the target with the front sight. I've shown you both. The major thing is to have fun. Don't be afraid of the gun. If you limp wrist it, the shells can get jammed. It's a tool.

Of course, no one in their right mind wants to be around a person who has a pistol but is ignorant of safety rules:

1. All guns are always loaded.. Treat them that way. 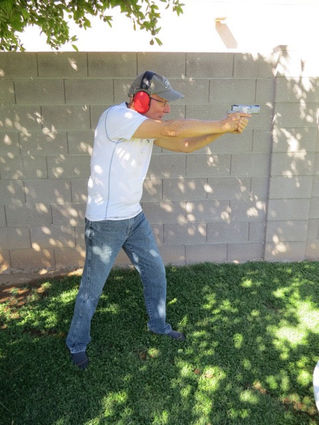 This is a proper stance.

3. Keep your finger off the trigger until you're ready to fire.

Gun stores such as Shooter's World have beginners' classes on shooting. In fact, Friday is Ladies' Day (and Night) and women shoot free. You can borrow one of their pistols if you need to, and they have people there to help you. Ben Avery also has beginners' shooting classes.

Do yourself and you family a favor: If you want to take up target shooting, teach them correctly so they have an actual chance of hitting the target and having some fun.

Because it is fun, but only if you put safety first.