Take Aim On The Seven Deadly Sins Of Shotgunning 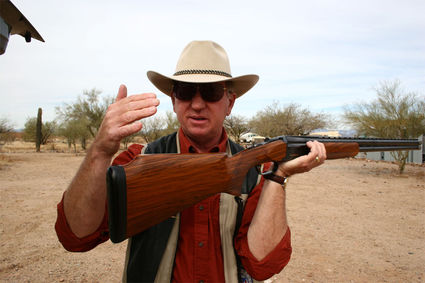 With the price of shells going through the roof, it pays to improve your shooting. One of the best ways to do that is to spend some time at the sporting clays range. The Ben Avery Sporting Clays Center on the Carefree Highway just west of I-17 has a great range with five-stand, two sporting clays courses and several trap and skeet ranges.

Avoiding these "seven deadly sins of shotgunning" will help you avoid embarrassment and save you money as well.

A shotgun must be brought to your cheek and shoulder and anchored in the same place every time you pull the trigger. You must be seeing straight down the top of the barrel. If you have a front and mid-bead, line them up.

Remember the feel of the comb on your cheek, and where the butt of the stock fits in your shoulder pocket. Do this every time you shoot the shotgun.

Greenwell advises practice, practice, and more practice, and recommends a safe at-home exercise to help. With an unloaded and safe gun, stand in front of a mirror, look at your right eye (if you are a right handed shooter), mount the gun with the hands moving together (no see-saw action), and pretend to shoot your eye.

Do this slowly, since the brain remembers the movement, not the speed of the movement. You are training your muscle memory.

If you lift your head off the stock just as you are about to shoot, the gun is no longer mounted correctly (see Number One). Greenwell says that your dominant eye (hopefully the one over the gun) is just like the rear sight on a rifle. As long as it is aligned with the front sight, everything is okay.

But move the rear sight, the gun will shoot somewhere else. Avoid the temptation to get a better look at the target by lifting your head. Keep your gun mount consistent as you are pulling the trigger.

Shooting a shotgun is very different than shooting a rifle. Typically, the rifle's target is stationary, while a shotgun's target is moving, but in both instances you must keep your eye on the target in order to hit it.

With a correct and consistent gun mount, the gun is shooting where you are looking. By keeping your eye on the target until it breaks, you are keeping the gun moving with the target.

If you "check your lead" by looking at the front sight or end of the barrel just before you pull the shotgun's trigger, the gun will stop moving with the target and you will miss. Remember: the target continues to move so the gun must continue to move.

Number Four: Inserting And Moving Muzzle Off The Target's Line

Most of us have some degree of hand/eye coordination which we use when shooting a shotgun correctly. When you mount the gun and ride the target across the sky for a long period of time, you begin to measure the target's lead and turn off that natural hand/eye coordination. Once you mount the gun, very little time should elapse before you pull the trigger.

Let the hand/eye coordination take over. Remember, you are looking hard at the target, seeing the line and speed. Turn your brain off and shoot. Trust yourself.

The inverse of this problem is shooting too soon, that is, shooting before you really understand what the target is doing. Understand the target line, then move the muzzle with the target's speed and line, mount the gun and pull the trigger - all in one smooth move.

Number Six: Being Out Of Sync With The Target

The barrel needs to move with the same speed and trajectory as the target, so avoid chasing the target with the barrel. If you do that, you'll have to slow down to shoot. Think about merging onto I-17 when the traffic is doing 65 mph. If you try to merge doing 30 mph, you feel like you have to speed up, then slow down once you merge.

Sliding in closer to the traffic speed leaves you much more comfortable and in control. Greenwell says to pick a hold point that allows you to comfortably move the shotgun's barrel while matching the speed and line of the target.

Number Seven: Being Off Balance When The Trigger Is Pulled

The right stance will keep you from being off balance when you take the shot. For a right handed person, the left foot should be pointing toward where you will break the target, with the right foot slightly behind at a comfortable distance (no wider than your shoulders) pointing to about two o'clock using the left foot as a twelve o'clock reference.

This gives you a comfortable arc in which to take the target before you run out of swing, and avoids having the shoulder drop, which causes the gun to arc down. Put a little weight on the leading foot and lean forward slightly. This will help keep the gun on the target's line and help the body absorb the gun's recoil.

Greenwell says that avoiding these seven common shooting sins will definitely improve your ability to hit what you are trying to shoot. 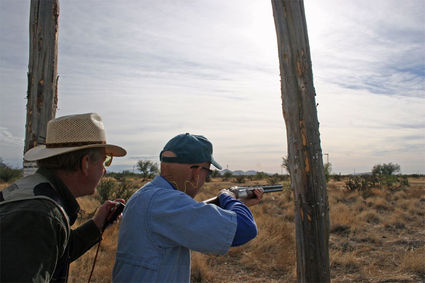 A few hours of professional instruction can work wonders on your shooting. Greenwell offers instruction and coaching to all levels of shotgun shooting at Confident Shotgunning, (480) 948-9053 or (602) 361-1128 (cell).

A cross-dominant shooter (right handed, left eye dominant) will have to make an adjustment to force the brain to receive primary information from the eye over the gun. He can learn to shoot with the other hand, put a small dot or small smear of lip balm on the shooting glasses' lens that covers the dominant eye, or learn to slightly squint the dominant eye just before mounting the gun.

If at all possible, learn as much as you can about the target's line using both eyes, then the cross-dominant solution will help the brain to receive primary information from the eye over the gun.