'Freeze It And They Will Come' 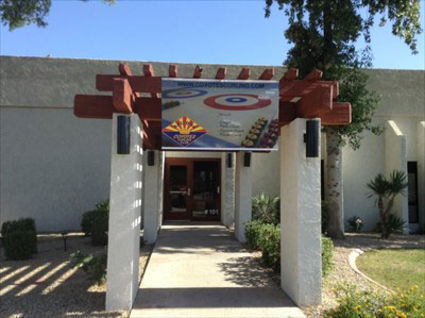 After 11 years of teaching Valley residents and visitors how to CURL, hosting tournaments, and offering all types of leagues, the Coyotes Curling Club relocated this past April from their Scottsdale, Ariz., "home" to their very own dedicated curling facility in Tempe, Ariz.

Since the move and the creation of Arizona's first dedicated curling facility, the Coyotes Curling Club have been a beacon for curlers and non-curlers alike who want the opportunity to CURL in the desert. The saying, "Freeze it and they will come" has never been more apt.

Having a world-class facility located in Arizona has caught the eye of the US Paralympic curling Team who earlier in January escaped the snow-packed parts of the United States such as Wisconsin, New York, and Connecticut to practice in sunny Tempe. The team had to cancel - due to weather delays - last year's practice around the same time when they held it in Madison, Wis.

The team, consisting of Penny Greely, James Joseph, Steve Emt, and Patrick McDonald (US Army Veteran), along with Coach Steve Brown, were at the Coyotes Curling Club from Jan. 7 to Jan. 11. The team was in Tempe, training for the World Championships that will be held in Lohja, Finland, Feb. 6-13.

For more information on Team USA or curling in Arizona, please contact the following: