Taking place just 400km from the Equator at Palembang City in Indonesia in constant 33C / 96Fh temperatures, this 35th World Cup Stop of the International Waterski & Wakeboard Federation (iwwf) was one of the most spectacular of the current series.

Sunday’s first Waterski Finals were for Women’s and Men’s Slalom. The four Women Finalists included the World Record holder, Regina Jaquess USA. However, it was Anais Amade FRA who set the standard from the start. In fact she held this lead till Regina Jaquess eventually entered the arena as the final contestant. With a score of three buoys on the 12m line, she took the 2012 Palembang World Cup Gold Medal in style – with Silver going to Anais Amade and Australia’s Karina Nowlan taking the Bronze Medal.

The Men’s Slalom Finals were unique. All but one contestant had a personal best score on the World Record rope length of 9.75m – a rare site which guaranteed the thousands of Palembang spectators a thrilling spectacle. Britain’s William Asher was third into the arena and his score of five buoys on 11.25m line took an early lead. The World Record Holder, Chris Parrish, was last to compete. Although he scored a solid four buoys on the 11.25m line, that was not enough to prevent Asher from taking the 2012 Palembang World Cup Slalom Gold Medal. This was his first World Cup title. Third place saw a draw between the two Italian Slalom specialists, Thomas Degasperi and Carlo Alais.

Wakeboard came next. In both the Pro Women and Pro Men events, the level of competition was the highest ever seen in the World Cup series. In both cases, it was the current dominant series leaders who yet again took the Gold Medals – Raimi Merritt USA and Harley Clifford AUS. Sweden’s Caroline Djupso picked up an ankle injury which opened the door for Amber Wing AUS and Nicola Butler GBR to take the Silver and Bronze Medals. In the Men’s Finals, once Harley Clifford continued his extraordinary run of World Cup successes, what remained was a fascinating battle between the young sixteen year-old Tony Iacconi from Australia’s New South Wales, and the experienced past World Champion Andrew Adkison from Florida, USA. On this occasion, it was the teenager Iacconi who came out on top with the Silver Medal, just ahead of Adkison.

As threatening afternoon Tropical rainy season clouds appeared on the horizon, the Jump event brought the thousands of spectators to their feet. This level of Waterski Jumping has never been seen in Indonesia till now. Having already taken the Slalom Gold Medal, Regina Jaquess USA was back again with a jump distance of 47.2m. Marion Mathieu FRA just managed to beat this with 48.3m on her very last attempt. The young Australian sensation, Jacinta Carroll, who has only recently recovered from injury, was just a half meter short but this secured the Silver Medal for her – with Gold going to Mathieu and Bronze to Jaquess, her second medal of the day.

The Men’s World Record Holder, Freddy Krueger USA, was last off the dock in the Jump Finals. All assumed that he would dominate as he has done so often. It was Felipe Miranda CHI who set the early pace with a distance of 59.7m. This was quickly beaten by Ryan Dodd CAN who had all the appearances of true winner with a score of 62.4m. However, although he failed to beat Dodd with his first two attempts, in the closing seconds of the day, to add to the drama, Freddy Krueger did it once again with a distance of 63.6m to take the Gold Medal. Silver went to Dodd and Bronze to Miranda.

The full Webcast show of this 35th World Cup Stop is now available at http://www.IWWF.tv

Photos and comments are also available on the Facebook page : iwwf

Results are available at : http://www.iwwfed.com 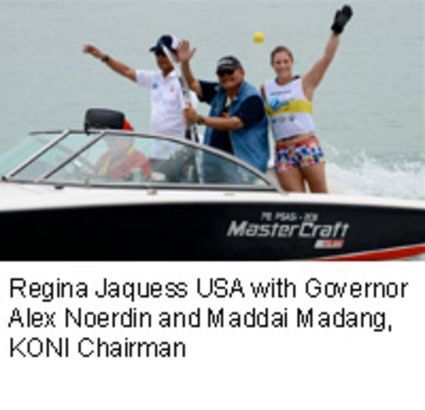