The Wind Beneath My Wings 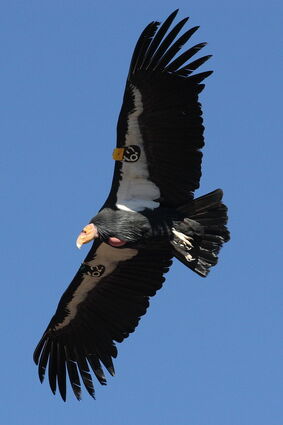 Watch California Condors Take Their First Flights In The Wild

This will happen during the 27th annual public condor release - in-person and live-streamed!

VERMILION CLIFFS, Ariz. - The Peregrine Fund and Bureau of Land Management at Vermilion Cliffs National Monument are hosting a celebration on National Public Lands Day, Saturday, September 24 by releasing captive-bred California Condors at 1 p.m. MDT (noon MST, northern-Arizona Condor Time) to take their first flights in the wild. The event will be held in-person at Vermilion Cliffs National Monument for anyone interested in traveling to the area, and it will be live streamed via The Peregrine Fund's YouTube Channel.

The Arizona-Utah California Condor conservation effort is a cooperative program by federal, state, and private partners, including The Peregrine Fund, the Bureau of Land Management in Utah, the Bureau of Land Management's Vermilion Cliffs National Monument, Arizona Game and Fish Department, U.S. Fish and Wildlife Service, Grand Canyon and Zion National Parks, Utah Division of Wildlife Resources, and Kaibab and Dixie National Forests among many other supporting groups and individuals.

This is the 27th year the partnership has marked National Public Lands Day with a public release event at Vermilion Cliffs. In 2020, due to COVID-19 restrictions, the team took the celebration online reaching more than 10,000 viewers of the event. Because of that success, the event will be live streamed again, for the third year in a row, in addition to the in-person event.

"The Bureau of Land Management is excited once again to host the annual Arizona/Utah California Condor National Public Lands Day event at Vermilion Cliffs National Monument. The BLM, alongside other state and federal agencies are privileged to work together with The Peregrine Fund in the recovery of this great species. We are excited to host this event in-person (on site) as well as virtually so that the scope and reach of this incredible and successful collaborative effort can continue to inspire people around the world," says Bureau of Land Management Vermilion Cliffs National Monument Manager Brandon Boshell.

113 Condors Now In The Skies

Condor Reintroduction Program Director for The Peregrine Fund, Tim Hauck says, "We currently have 113 California Condors flying the skies of northern Arizona and southern Utah. We're excited that the population continues to grow and are monitoring several nests with young birds that have hatched in the wild this year. Adding these captive-reared birds to the wild flock helps to increase genetic diversity and overall success of the program."

Because the condor team is unable to predict exactly when the birds will choose to leave their release pen, the live stream event will have a picture-in-picture set up with a camera trained on the release pen and will include videos and interviews with the condor biologists and conservationists who work with these massive birds! Viewers will also be able to ask questions and have them answered live by the condor team.

The young condors hatched at The Peregrine Fund's World Center for Birds of Prey in Boise, Idaho and several partner organizations, including the Oregon Zoo, Los Angeles Zoo, and San Diego Zoo Safari Park and were transported to Vermilion Cliffs National Monument for release to the wild.

As of May 2022, there are 113 condors in the wild in the rugged canyon country of northern Arizona and southern Utah and the total world population of Endangered California Condors numbers more than 550 individuals, with more than half flying free in Arizona, Utah, California, and Mexico. Set a reminder to join the live stream of the condor release on The Peregrine Fund's YouTube Channel! (The live stream begins at 12:30 p.m. Mountain Time)

Information About Attending The Event In Person

• Driving directions: Take Highway 89A from Kanab or Page to the Vermilion Cliffs (from Flagstaff take Highway 89 to Highway 89A). Turn north onto BLM Road 1065 (a dirt road next to the small house just east of the Kaibab Plateau) and continue almost 3 miles. If traveling from Utah, please note the differences between time zones as the event begins at 1 p.m. MDT (noon MST, northern-Arizona Condor Time).

• Bring: Spotting scope or binoculars, sunscreen, hat, ample water, snacks, a chair, and layered clothing as the closest facilities to obtain supplies are 40 minutes away from the remote release site.

• Details: Informational kiosk, shade structure, and restroom at the site.

For more information about this California Condor recovery project: https://peregrinefund.org/projects/california-condor