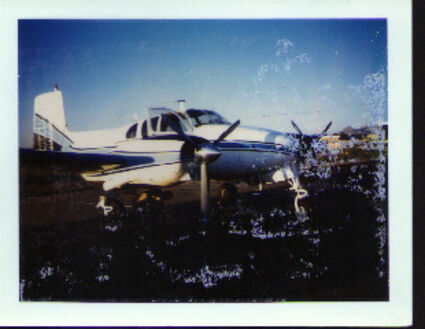 Conrad was in the left seat of the vintage Twin Bonanza pointed West on the Deer Valley, Arizona runway. Sitting in the right seat was his date Virginia. In the spacious cabin behind were Jack, Lynn, Jim and his date.

Virginia had not been in the airplane before. Jack and Lynn had taken numerous trips with Conrad and Jim. Jim had flown hundreds of hours with Conrad to all sorts of destinations.

This trip began the night before when Jack had called Conrad and Jim and suggested they make a trip to Las Vegas the next day. There was a show that Jack wanted to see. He was well known in Las Vegas and when he was there the shows and rooms were comped. As his guests, so were ours.

They got to the end of the runway and Conrad lifted the airplane about three-feet off the ground and pulled up the landing gear. Then instead of a gradual take off he pointed the nose straight up. This was a powerful airplane with the new turbo charged engines.

This was the start of a great and exciting trip. Before long they reached altitude for their trip to Las Vegas. Somewhere over the desert Jim reached over the seat and suggested to Conrad that they go down and chase rabbits. Conrad said sure why not. Jack said what do you mean chase rabbits? Conrad showed him. He did a sideslip and the Bonanza was almost immediately at cactus top level. After a few minutes of this low level ride Jack and everyone else figured out what chasing rabbits meant.

After climbing up off the desert floor everyone just rode and enjoyed a broader view. One of the passengers suggested cocktail time. Jim got up and opened the bar. After taking and filling drink orders he asked Conrad what he would like. Conrad said he thought bourbon would be good. This remark got puzzled looks from everyone on board. Jack looked at Jim and said Conrad doesn't drink. Jim said not often but I guess he would like something today. Jim Pulled out a new bottle of bourbon and poured a substantial amount into a glass and handed it to Conrad.

Conrad drank it down and asked for another. Now the puzzled looks were turning into concerned looks. Jim poured another and Conrad wasted no time in finishing the second one.

By this time they were over the Grand Canyon. Jim suggested a closer look at the canyon. Before anyone could object Conrad went into another side slip and boom they were in the bottom of the canyon very close to the river with canyon walls off both wing tips. Jim had stood up and positioned himself between the cabin and the cockpit. No one panicked. Once again they gained altitude and headed for Las Vegas. It was a very quiet ride.

The minute they landed and got the plane parked Jack told Lynn to get straight into the airport and purchase tickets for them to return to Phoenix. Jim stopped Jack on the tarmac with the bottle of bourbon in his hand. He told Jack he wanted to explain. Jack was not in a mood to listen. However, he did. Jim opened the bottle of bourbon and asked Jack to take a sip. Jack was still mad and refused. Jack finally agreed to smell the bourbon. That's when the big grin appeared on his face. The bourbon was iced tea.

The group found a limousine for the ride into town. The Grand Canyon ride and the story behind the prank was gone over in the car. The fear had been replace by the story they had to tell and the beauty of the canyon from that vantage point. The group had a long night and the story was told over and over in a variety of hotels. The story had spread so quickly that the group found that people were telling the about it not knowing who they were.

Fifty years later you can still hear that story being told around the valley.

This is not the only adventure. Check out Carol Allen's

Icy Cold Was The Summer.