Icy Cold Was The Summer

Part I: Chapter One - A Letter from London 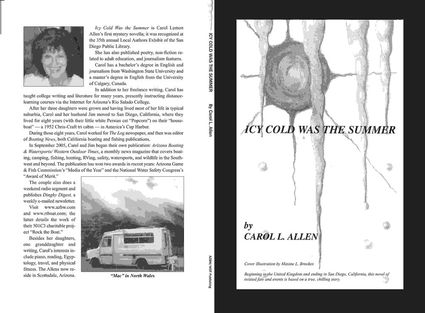 Icy Cold Was the Summer is Carol Lemon Allen's first mystery novella; it was recognized at the 35th annual Local Authors Exhibit of the San Diego Public Library.

Just before Jim and I left Phoenix, Arizona, for our month-long trip to the United Kingdom, I received a letter from some old Canadian friends--the Cramptons.

The Cramptons had been a young, childless couple we had known in Calgary before they were moved by a communications system to London, England. They had been there for several years, apparently quite successful in business, and now the parents of three young children.

Purchase Icy Cold Was The Summer

We intended to visit them in their townhouse on Trevor Place, near Hyde Park. I opened the letter, began to read and sank into my chair with horror at the contents:

We are anxious to see you and are so looking forward to your visiting us in London. It's been too many years since Calgary. And to Don and me, there is nothing more rewarding than spending time with our old friends from Canada. Those were good years, eh? We have lots of reminiscing to do together.

You have our address and phone number. We have your schedule. Please call us when you get into Euston Station, and we'll come get you--and do a little sightseeing on the way home.

On a sadder note, all of us are in the middle of a terrible nightmare here. We have been keeping Douglas, Lee and little Janey on a very tight leash since the kidnapping and murder of one of Jane's classmates in infant school. It has been horrible. All we parents are taking our children to school, picking them up afterwards, and watching them every minute. Going outside has been out of the question, and we have stopped letting them play in Hyde Park which they used to love to do after school in the afternoon. (If we go at all, we go as a family in the evening--just for a walk.) I am even afraid getting in and out of the car by our house. What if the murderer is hiding there in the shadowy bushes ready to grab one of our children? Since January we have been in fear throughout the neighborhood.

It all started with a series of rapes in and near Hyde Park. The rape victims were mostly young working girls on their way home. And, as horrifying as those rapes were, the most devastating tragedy occurred in March. One of Janey's little classmates did not come to infant school (kindergarten to you North Americans) one chilly morning. When little Kimberly Clarke's parents were called, they said that she had left home at the regular time and had walked the short distance to school, just as she did every morning. They had not seen her since. No need to tell you that panic struck us all. Pleas went out on radio and television for all of us to help in the search for Kimberly. Her description was broadcast, and the picture of a pretty, smiling little dark-haired girl with rosy cheeks was everywhere.

Don and I took turns joining the neighbors and mounted police in looking for Kimberly. Long into the chilly nights we looked: in back lanes, under and inside parked vehicles, in shrubbery, in trash containers--everywhere! Carol and Jim, each time I bent over to look under something or strained to look up into something, I was so frightened that I would find her but that she would be dead. And the nights we all went looking were ghostly. Shifting fog teased our eyes and a steady drizzle of rain chilled our bodies. There was eerie silence in the streets; only an occasional shuffling or voices murmuring could be heard. Figures of people helping the search became apparitions in the shadows; each one I saw caused me to jump in fright.

For nearly three days and evenings this nightmare continued. Then, the gruesome outcome of the search was broadcast: Kimberly's little mutilated body was discovered in a trash bin two blocks from our home! An older gentleman, a neighbor, had gone out to empty his trash, saw a large black bag that he didn't recognize in the bin. He pulled open its drawstring and discovered the grizzly remains. He ran screaming down the street and finally found a bobby to whom he stuttered his gruesome discovery. (We have heard that poor old Mr. Hardy has not and will not ever return to his home. Can't say that I blame him.)

(Carol and Jim, I am shaking as I write. This is the first time I've put this nightmare on paper, and I'm finding that the whole thing is too horrible for words.) Mr. Hardy had discovered the body of Kimberly Clarke. She had been raped, torn, murdered, then crudely wrapped up with some of her clothing and a little spotted umbrella, and stuffed into the garbage can behind Mr. Hardy's home.

Since March, details and clues have been unraveled and revealed to the public little by little. Since March, detectives from Scotland Yard have surmised that the murderer was a man, possibly a young man, probably from our neighborhood or nearby, that he was perhaps unemployed or had a part time, flexible job because Kimberly's abduction occurred on her way to school when most adult males are on their way to or at work.

It is now the end of May, nearly June, and that is all we know. Every parent has become tense, overly protective of the children, and suspicious of nearly every young male in this area. It is a horrible suspension in time and place, and we are all praying for a resolution soon.

The family, friends, schoolmates, and neighborhood had some closure in April when, finally, Kimberly's services were held in a church near her home. This was one of the saddest events I've ever experienced. The service was poignantly beautiful, and the little girl was honored with a celebration of her short life. All was done with dignity. But the tragedy of her brutal murder is a heavy burden which we all carry every day. I can only imagine the depth of sorrow that presses on her family's hearts. It is too sad. Part of me weeps daily; the other part screams out in anger at the senseless acts, which took her young life so cruelly.

And that is where we are at this time. This letter is longer than I had intended, but the story is neither quick nor easy to tell. By the time you arrive in London, we hope the detectives will have apprehended the murderer, that life will have returned to some degree of normalcy, and that the deep wounds will have begun to heal. For until then, there will be no peace here--only the tension of terror.

I have enclosed some newspaper clippings about this haunting series of events. Please keep us in your thoughts and prayers. 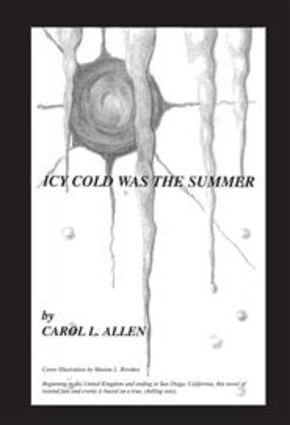 Icy Cold Was The Summer

With shaking hands and misted eyes I looked at the newspaper photos of a pretty little girl with big dark eyes, long braids and a grin that communicated a once happy, carefree little spirit. Even though I had not known her except through the letter I had just finished, a sharp pain stabbed my heart; a knot tied itself inside my throat. How very, very sad. How tragic was the fact that this young life had been stolen, just as it had been beginning.

Purchase Icy Cold Was The Summer