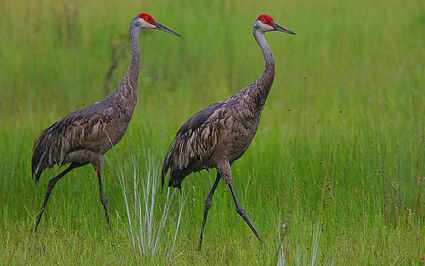 Sandhill cranes by the thousands have once again returned to their wintering grounds at the Whitewater Draw Wildlife Area in southeastern Arizona. For the next few months, viewers can observe almost 20,000 of these fascinating birds on a live-streaming camera installed by the Arizona Game and Fish Department (AZGFD). View the live stream here: http://www.azgfd.gov/sandhillcranes.

"The sandhill cranes have once again sprung Whitewater Draw Wildlife Area back to life," said Jeff Meyers, wildlife viewing program manager. "It's truly a pleasure to offer this unfiltered view of our state's wildlife directly to the public, giving them a chance to see the migration of this incredible species in action."

The best time to view the cranes is 30 minutes before and after sunrise, just before they leave to feed for the morning. The leggy birds generally return to the wildlife area before noon, where they will remain for the rest of the day. With the camera being outfitted with infrared technology, viewers also can observe the cranes at night.

AZGFD will do its best to keep the camera focused on the cranes and other interesting wildlife subjects, but there will be times when that isn't possible because of the unpredictability of wildlife. Viewers who don't immediately see activity are encouraged to routinely check back.

Across the globe, there are 15 species of cranes. Two species of cranes are found in North America - sandhill, the most abundant species, and the endangered whooping crane. Sandhills are wary birds that shy away from areas of dense vegetation that may conceal predators. Cranes prefer to feed and roost in open areas where potential danger can be seen from a distance.

The cranes will begin to leave the wildlife area between late February and the middle of March. By April, all of the birds will be on their way to their northern nesting grounds, some as far away as Siberia.

The live stream is supported by the Wildlife Conservation Fund, which comes from tribal gaming and the Wildlife Viewing Program. The cameras are supported in part by public donations. To view the department's live-streaming cameras, or to find information on wildlife viewing, visit http://www.azgfd.gov/wildlife and click on "Wildlife Viewing."

The Arizona Game and Fish Commission-owned property in the southeastern part of the state is a roosting and loafing place for more than 20,000 sandhill cranes each year. Game and Fish biologists, along with award-winning photographer George Andrejko, will provide an exclusive, up-close opportunity to learn about and photograph these spectacular birds. Andrejko will be available to provide tips, instruction and advice for both novice and experienced photographers.

The cost is $50 per person. Registration is required, as space is limited. All proceeds support the department's Wildlife Viewing Program.