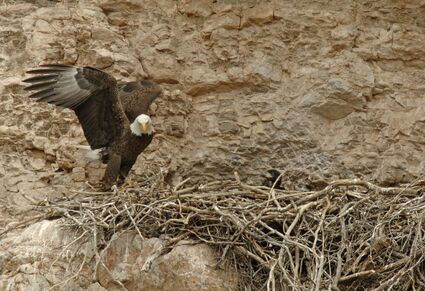 Arizona's bald eagles are back, and they will soon be preparing for the next generation of eagles at breeding sites statewide.

To assist with the state's continued bald eagle population growth, the Arizona Game and Fish Department (AZGFD) encourages outdoor recreationists, aircraft pilots, drone operators and motorized paragliders to do their part by not disturbing the state's 93 eagle breeding areas.

To protect breeding attempts, some portions of public land and water areas will be temporarily closed to help these majestic animals and ensure even more young eagles take to the skies this spring.

"Arizona's bald eagles are hard at work preparing their nest for what we hope will be a productive breeding season," said Kenneth "Tuk" Jacobson, bald eagle management coordinator. "The birds nest, forage and roost at rivers and lakes that are also popular recreation spots. That's why we must be vigilant to help protect the birds and ensure their populations statewide continue to flourish. That success wouldn't be possible without the cooperation of outdoor recreationists who respect the closures during the breeding season."

During the 2021 breeding season, 87 young hatched, and 69 reached the important milestone of their first flight, known as fledging.

Pilots are reminded to maintain the FAA-recommended 2,000-foot above ground level advisory when flying over bald eagle habitat, while drones and paragliders are asked to avoid the areas completely. Bald eagles are sensitive to even short durations of low-flying aircraft activity near their nests, and just a few minutes of disturbance can lead to a nesting failure.