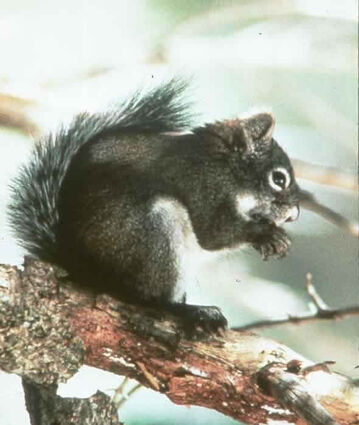 Four years after their habitat was nearly wiped out by the 2017 Frye Fire in the Pinaleño Mountains of southeastern Arizona, an annual survey of the endangered Mt. Graham red squirrel shows their numbers are holding steady compared with last year.

The annual survey resulted in a minimum estimate of 109 squirrels-the same number as in 2020. Last year was the first time the population had returned to the triple digits since being severely impacted by the Frye Fire. The survey was conducted jointly by the Arizona Game and Fish Department (AZGFD), U.S. Forest Service (USFS) Coronado National Forest, U.S. Fish and Wildlife Service (USFWS), Arizona Center for Nature Conservation – Phoenix Zoo, and the University of Arizona.

In 2016, there were an estimated 252 squirrels. Immediately following the Frye Fire, estimates dropped to a mere 33 individuals. Typical ranges since 2000 have been between 200 and 300 squirrels.

"Mt. Graham red squirrels have faced some significant challenges since their habitat was severely damaged by the Frye Fire, but the fact the numbers didn't decline is an encouraging sign," said Tim Snow, AZGFD terrestrial wildlife specialist. "AZGFD and its partners will continue our conservation work with this squirrel to give it a fighting shot at recovery."

The annual red squirrel survey consists of visiting all known middens, which are areas where red squirrels store or cache their cones. Activity at these middens is used to estimate the population size. "While the population didn't increase this year, we're glad that it didn't decrease, which indicates the Mt. Graham red squirrel is persevering and finding available resources on the mountain," said Marit Alanen, fish and wildlife biologist with USFWS. "We look forward to continuing to work with our partners to address the threats to the squirrels' population and habitat."

Listed As Endangered In 1987

Mt. Graham red squirrels were listed as endangered in 1987. The subspecies lives only in the upper elevation conifer forests of the Pinaleño Mountains and feeds primarily on conifer seeds. They are highly territorial and have lower reproductive rates than red squirrels in other locations.

Thank You To AZGFD

"The Safford Ranger District would like to thank the Arizona Game and Fish Department and all the partners that participated in the 2021 Mt. Graham Red Squirrel Census," said George Garcia, Safford District ranger for the Coronado National Forest. "Based on the projected population numbers from this year's census, the Safford Ranger District is encouraged that landscape restoration efforts and the conservation measures applied to those efforts, in partnership with the Fish & Wildlife Service, are maintaining a stable population trend."

Long-term impacts to Mt. Graham red squirrels and their habitat include high-intensity wildfires and associated insect infestations, possible competition with Abert's squirrels, and poor cone crops caused by drought, all of which influence population size. Biologists continue to explore new methods to conserve and protect the species, including continued squirrel research, developing long-term forest management strategies across the fire-impacted landscape such as re-seeding and planting coniferous trees, and a managed care breeding program.