Partner Projects: From Pens To Dens 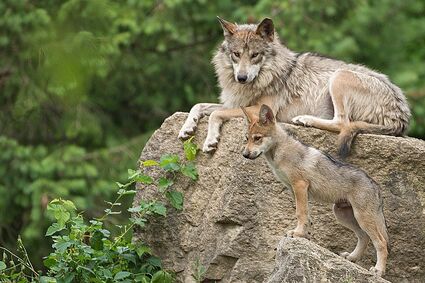 A record 22 captive-born Mexican wolf pups recently were placed in dens to be raised in the wild by their surrogate parents after another successful cross-foster season. For six years, wild Mexican wolves have been raising captive-born pups as their own, helping to boost the genetic diversity of this endangered subspecies and moving the wild population towards recovery.In April and May, nine pups were fostered into three different packs in eastern Arizona, and 13 were fostered into five packs in western New Mexico.

"Fostering is an outstanding example of a working private-public recovery program. Wolf recovery has to recognize the importance of meeting genetic criteria, which requires many private organizations maintaining captive wolves for release into the wild. Without this important partnership, genetic recovery would be essentially impossible," said Jim deVos, AZGFD Mexican wolf coordinator. "Importantly, we are now seeing Mexican wolves that have been fostered producing litters themselves supporting the use of fostering as an effective conservation tool."

Cross-fostering is a proven method used by the Mexican Wolf Interagency Field Team (IFT) to increase genetic diversity in the wild Mexican wolf population. It involves placing genetically diverse pups that are 14 days or younger from the captive breeding population into wild dens with similarly aged pups to be raised in the wild by experienced wolves. The IFT has documented that cross-fostered pups have the same survival rate as wild-born pups in their first year of life (about 50%).

"The U.S. Fish and Wildlife Service remains committed to improving the health of the wild population of Mexican wolves, and cross-fostering is one of the many tools we are using to make progress in that direction," said Allison Greenleaf, biologist with the U.S. Fish and Wildlife Service. "To see this program continuing to have success is a true testament to the hard work of all our field staff and partners."

• El Paso Zoo in El Paso, Texas: One litter provided three pups into the Castle Rock Pack in Arizona and one pup into the Leon Pack in New Mexico;

Since the beginning of the cross-fostering program, the IFT has documented a minimum of 12 cross-fostered wolves currently alive and surviving in the wild. Seven of these wolves have reached breeding age (two years old) and count toward the Mexican Wolf Recovery Plan criterion for genetic recovery of the population. Four of these cross-fostered wolves have subsequently produced pups in the wild. Pups are too young to mark when fostered; therefore, only those that are recaptured can be confirmed as being alive. It is likely that other fostered pups are alive and contributing to improving the genetic diversity of the wild population and helping meet recovery criteria.

The IFT will continue to monitor the packs that pups were placed in through GPS and radio telemetry signals from collars on older wolves within the pack to avoid further disturbance. Later, through remote camera observations and efforts to capture the young of the year, the IFT plans to document additional survival of cross-fostered pups.

The end-of-year census for 2020 showed a minimum of 186 wild Mexican wolves in the Mexican Wolf Experimental Population Area (72 in Arizona and 114 in New Mexico). This marked a 14 percent increase in the population from a minimum of 163 wolves counted at the end of 2019. The IFT documented a 24 percent growth in the Mexican wolf population in 2019, which has nearly doubled in size over the last five years.

For more information on the Mexican Wolf Recovery Program, visit the Arizona Game and Fish Department's website or the U.S. Fish and Wildlife Service's website