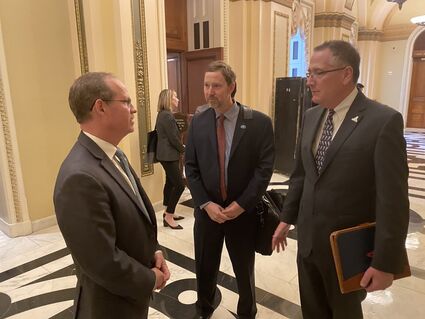 Boat Owners Association of The United States (BoatUS), the national advocacy, services and safety group with more than 700,000 members, weighed in on a range of boating issues, debates and legislation affecting recreational boaters in 2020. As the boater's advocate, BoatUS brought the unique perspective and needs of the recreational boat owner to local governments, halls of state capitals and Washington, D.C. Here are some of the successes that BoatUS earned over the past year:

Securing its re-authorization prior to its September 2021 expiration will be a top goal in the new year, as will working with the next Congress and administration to safeguard this crucial resource for boaters.

On Capitol Hill, recreational boating has long held a back seat when legislators debate funding for water resources such as harbor and waterway maintenance – but that's changing. Greater awareness of recreational boating's impact is helping frame the debate. BoatUS has advocated for "set-asides" to include funds targeting recreational boating needs such as improved access or navigation for smaller harbors.

An April 22 decision by the Federal Communications Commission gave mobile satellite services Ligado Networks permission to operate a mobile telephone service that could interfere with the GPS signal. Along with the Keep GPS Working Coalition, BoatUS was actively engaged in lobbying Congress and the administration to attempt to reverse this decision and protect the integrity of GPS. We will continue to demand language requiring an additional review of this decision within the National Defense Authorization Act.

Reform of the Renewable Fuel Standard, which requires Americans to consume increasing amounts of higher-ethanol fuels such as E15 (prohibited for use in boats), remains deadlocked. BoatUS advocated at the Environmental Protection Agency for additional consumer protections from misfueling of boats with E15 and has supported ethanol alternatives such as biobutanol, helping to ease its path to market. In 2021 new efforts to reform this broken policy are likely, and BoatUS with continue to work with partners including the National Marine Manufacturer's Association.

A bipartisan bill passed by both House and Senate, the Great American Outdoor Act is the biggest land conservation legislation in a generation, establishing a national park and Public Lands Legacy Restoration Fund that will provide up to $9 billion over the next five years. BoatUS took an active role in working with the Outdoor Recreational Roundtable to pass this landmark legislation.

BoatUS continued to work on recreational fishing policy reform in conjunction with other groups. We testified in favor of legislation in Virginia to change the management of a forage species. This legislation was passed. On the national level, BoatUS engaged in the implementation of the Modern Fish Act, working to ensure the National Marine Fisheries Service meets it obligations required by this legislation.

Several states restricted boating activities as part of their COVID response. BoatUS successfully advocated for lifting such restrictions earlier in the process with the National Governors Association and with individual governors. We continue to advocate for keeping access to the water open.

The Florida 2020 legislative session saw several bills with potentially negative consequences for boating defeated or modified to be more favorable to boaters. BoatUS defeated restrictions on anchoring in particular areas and helped to modify a punitive marina storm evacuation proposal to more a reasonable policy, although the bill ultimately did not pass. BoatUS continues to advocate for a uniform and consistent statewide anchoring policy.