How To Practice When You Can't Find Ammo 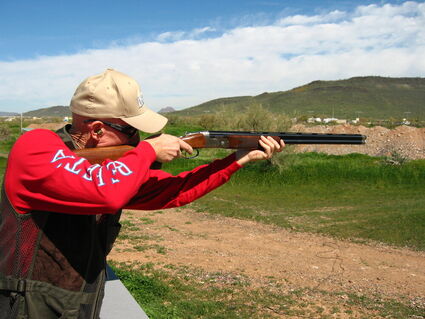 The right shotgun mount is basic to hitting your target. It's something you can practice at home.

The year 2021 is starting out with ammunition shortages that are probably going to continue well into the year, according to the NRA. Even guys who reload their own ammo are having a hard time, because primers are in short supply too. If you have a bit of ammo, you might be loathe to shoot it up until you can replace it, and I get that – I feel the same way. But just because you don't want to "waste" your ammo doesn't mean you can't practice and keep your shooting skills sharp.

Even shotgun shells can be hard to find right now, and that's a bummer, because Margie and I really enjoy upland hunting and sporting clays. Also, shooting is a perishable skill, and if we don't practice, it really shows in the field. We bought some videos from Gil and Vicki Ash of OSP (Optimum Shotgun Performance) Shooting School in Texas. I don't know if it's available any more, but I checked on Amazon and you can get the book still. Anyway, one of the things from that video that really helped both of us was a drill they taught on mounting and moving the shotgun.

Mounting your shotgun is critical because if it isn't lined up with your eye correctly, you're probably not going to hit the target. John Greenwell of Confident Shotgunning taught us to bring the gun forward, then in to the shoulder and get it against your cheek. Your eye should be looking straight down the top of the barrel. Gil and Vickie's drill requires just a ceiling and a flashlight small enough to fit in the bore of your shotgun.

We shoot 20 ga, so we use little Maglite flashlights. We wrapped the flashlights with painters tape to keep them from scratching the barrel. Here's the drill: look at the line where the ceiling meets the wall the entire time you are doing the drill. Don't look at the gun. Shoulder the shotgun and make the light track along the ceiling line. Don't worry if you start out poorly. I sure did. But if you do this consistently, it will make a huge difference in your shotgun shooting. No shells required.

If you want to practice this shotgun technique with a trigger pull, get some snap caps so you can pull the trigger without damaging the gun. And of course check the gun twice to make absolutely certain that it isn't loaded.

One of the things we learned in a Defensive Pistol Course at Shooters World was five ways to use a flashlight while shooting. My favorite was to hold the flashlight in your weak hand, using that wrist to stabilize your shooting hand. Look at the photos to see what I mean. We practice this from low ready about three times a week for several minutes. We have a blue gun and a Laserlyte system (www.laserlyte.com) that lets you interact with a target so you know if you're hitting it. The laser goes in the blue gun, and pulling the trigger shoots a laser toward the target. Instant feedback. It's awesome.

Another way to practice with this setup is to use it to fire from behind cover, or have your partner move around with the target while you shoot. It's even better than a shooting range for things like that.

I don't know about you, but I am constantly amazed at how many different kinds of holster there are for concealed carry. There are offbody holsters such as purses, fanny packs, messenger bags, and backpacks, plus an almost endless array of holsters and clothing designed to keep your weapon close. Inside the waistband, outside the waistband, pocket holsters, tees and tanks with holsters, belly bands, ankle holsters, even corsets and garter holsters for the ladies.

No matter how many you choose to use (and if you're like us you've got a drawer full of different holsters), you need to be sure that the holster is actually functional. In other works, if you need it, can you get your gun out and on target FAST?

This is something you really need to practice. Get yourself a blue gun that is identical to your carry pistol. If you don't have a blue gun, then make absolutely certain your gun is unloaded. Drop the magazine, check the chamber, then check the chamber again. Put the blue gun in the holster and see how fast you can get it out and on target. The goal here is to draw from concealment and get it on target with a good trigger press in 1-1/2 seconds. If you've ever taken a CCW or Defensive Pistol course, you probably know the 21-Foot Rule.

In case you don't know the 21 Foot Rule, here it is: An attacker with a knife who is 21 feet away from you can get to you and stab you before you can get your gun out to defend yourself. And that's with your already having him on your radar. We watched a film in our class where they challenged this rule. They put two guys in the room. One had a rubber knife and one had a blue gun concealed inside the waistband. 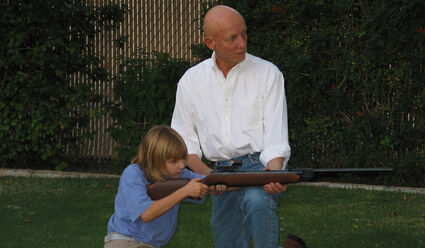 We even practice shooting in the back yard with a BB gun and a plywood target.

The guy with the gun knew the knife guy was going to attack him and he was watching and waiting. They circled around the room eyeing each other and suddenly the knife guy made his move. The gun guy never had a chance. If it had been real, he'd be dead or wounded. Even worse, the knife guy would now have a gun. Seriously, you need to practice. And you need to stay aware all the time.

Another great little knowledge nugget we learned in the Defensive Pistol Course was that most CCW encounters last less than six seconds. Here's what our instructor told us: When you're practicing your draw, remember that slow is smooth and smooth is fast. Practice until you get smooth and you'll be fast. But practice is essential. Don't let an ammo shortage be an excuse to slack off. Practice every day, even if it's just for a few minutes.