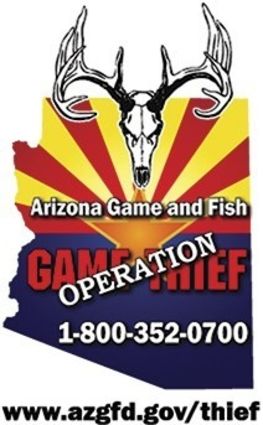 Arizona has almost 114 million square miles of harsh deserts, rugged canyons, sweeping plateaus and thick forests that are spread across some 15 counties.

That's a lot of territory to cover for the 97 Wildlife managers, or game wardens, of the Arizona Game and Fish Department (AZGFD). It's a monumental task, done daily by dedicated people who are charged with being part officer, part biologist, part educator, and all-the-time conduit to the public.

With the start of Arizona's big game hunting seasons right around the corner, AZGFD is asking sportsmen to help ensure the state's most precious resource - its Wildlife - is conserved and protected. At the heart of these law enforcement and conservation efforts is the department's operation game thief (OGT) program, a silent witness initiative that encourages the public to report information about the illegal take of Wildlife and suspicious activity.

All calls to the OGT hotline (800-352-0700) will be strictly confidential, and callers can remain anonymous if needed. The program offers rewards ranging from $500 up to $8,000, in some cases, for information that leads to an arrest.

"Poachers are thieves who pose a serious threat to wildlife," said Scott Fischer, OGT program manager. "Poachers are criminals. That's why it's important that hunters, who are committed to the time-honored tradition of hunting legally and ethically, continue to be vigilant by using their eyes and ears to help AZGFD investigate poaching cases and prosecute the perpetrators."

"The hunting community does a great job of policing itself. If you see something, say something. Together, we can make a difference for Arizona's wildlife."

OGT received more than 2,000 calls in 2019, resulting in 135 citations being issued statewide for Wildlife violations, including the illegal take of big game, fishing violations, and the unlawful killing of migratory birds. Here are the top five reported violations last year:

• 66 for the illegal take of raptors.

In 2019, Wildlife violators were assessed $60,074.86 in civil fines, proceeds that benefit the department's Wildlife Theft Prevention Fund, which provides for rewards and promoting OGT. In addition, 16 individuals had their hunting and/or fishing licenses revoked by the Arizona Game and Fish Commission. AZGFD does not receive money from the state's general fund.

Of course, Wildlife managers realize that mistakes sometimes are made in the field by the most well-intentioned of sportsmen. Those who self-report violations often receive just a written warning (provided negligence isn't found on the part of the hunter), and the meat from the Wildlife taken is typically donated to local food banks.

For more information about OGT, including helpful tips on how to report a Wildlife violation, see page 83 in the "2020-21 Arizona Hunting Regulations."