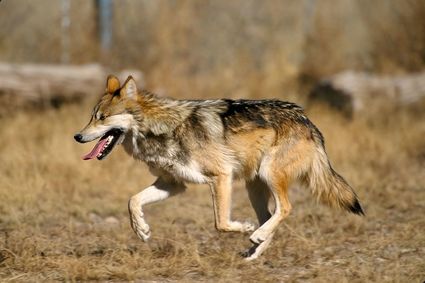 A record 20 captive-born pups are cross-fostered into wild packs.

The Mexican wolf recovery effort recently got a genetic boost when biologists from the Arizona Game and Fish Department (AZGFD), New Mexico Department of Game And Fish (NMDGF), and Mexican Wolf Species Survival Plan (SSP), with extensive logistical support from the U.S. Fish and Wildlife Service (USFWS), worked together to cross-foster 20 genetically diverse wolf pups from captive facilities across the U.S. into litters of wild wolf packs.

Cross-fostering is a proven method used by the Mexican Wolf Interagency Field Team (IFT) to increase genetic diversity in the wild Mexican wolf population. It involves placing genetically diverse pups less than 14 days old from captive breeding populations into wild dens with similarly aged pups to be raised as wild wolves. The IFT has documented that cross-fostered pups have the same survival rate as wild-born pups in their first year of life (about 50%), and survival rates using this technique are generally higher than other wolf release methods.

• Watch a video on cross-fostering from 2017: https://www.youtube.com/watch?v=-6jAqNEgzQ0

"Managing genetics is one of the biggest challenges facing Mexican wolf conservation, even as constant progress is being made on numeric recovery," said Jim deVos, Assistant Director for Wildlife Management at the Arizona Game and Fish Department. "Science has proven that cross-fostering young pups works in increasing genetic diversity."

Aerial support of three cross-foster operations was provided by LightHawk Conservation Flying and a private jet donor associated with one transfer from the Endangered Wolf Center. Their donations made possible three early morning flights of pups from the Midwest to ensure IFT biologists had ample daylight to conduct operations.

"We are grateful to all those who contributed to the success of this year's efforts, including the staff members at the captive facilities that provided pups and the organizations and individuals that provided flight support," said Paul Greer, Mexican Wolf IFT Leader for Arizona Game And Fish.

"Despite the many challenges this year has presented, staff from the captive facilities, LightHawk, and our state partners came through and placed a record number of captive-born pups into the wild," said Brady McGee, Mexican Wolf Recovery Coordinator for the USFWS in Albuquerque, New Mexico. "The U.S. Fish and Wildlife Service thanks these partners for their commitment to ensuring cross-fostering was a success in 2020."

This is the first time the New Mexico Department of Game And Fish has participated in the cross-fostering effort since rejoining the Mexican Wolf Recovery Program last year.

"The cooperation between the two state Wildlife agencies was key given the challenges faced with the current pandemic," said Stewart Liley, Chief of the Wildlife Division, New Mexico Department of Game And Fish. "Working together allowed a very successful cross-fostering season and keeping pace with improving genetics in the wild."

The IFT will continue to monitor the packs through GPS and radio telemetry signals from collars placed on the wolves to avoid further disturbance. Later, through remote camera observations and efforts to capture the young of the year, the IFT plans to document survival of the cross-fostered pups

The end-of-year census for 2019 showed a minimum of 163 wild Mexican wolves in the Mexican Wolf Experimental Population Area (76 in Arizona and 87 in New Mexico), up from a minimum of 131 wolves counted at the end of 2018.

For more information on the Mexican Wolf Recovery Program, visit the Arizona Game and Fish Department's website or the U.S. Fish and Wildlife Service's website.