Do Your Part; Stay Smart About Desert Tortoises 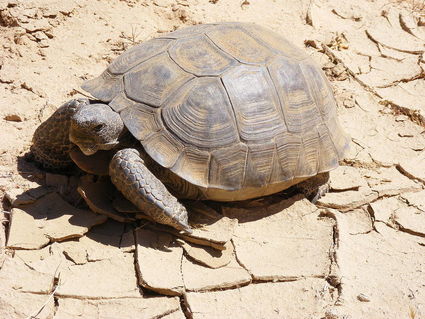 Much-needed rain brings out desert Wildlife in Arizona. Animals may wander in search of mates, moisture and, if necessary, to escape flooding. Desert tortoises are one of several amazing species that can be encountered during Arizona's Monsoon.

The Arizona Game and Fish Department (AZGFD) urges the public to follow these important guidelines when coming across a desert tortoise:

• Keep wild tortoises wild: Do not remove a tortoise from the wild. Taking a wild tortoise home is illegal in Arizona. Additionally, most tortoises stay in the same small area their entire lives, so a tortoise that has been relocated will not know where to find food and shelter and likely die. For those who are interested in sharing their home with a desert tortoise, and reside within Arizona, they should do it legally and responsibly through the AZGFD Tortoise Adoption Program.

• Keep dogs away from wild desert tortoises: Even the most gentle dog can pose a serious threat to a tortoise. Keeping dogs on leashes or in fenced yards is an effective way of reducing encounters with tortoises.

• If a desert tortoise is spotted crossing a busy road in a populated area, call the AZGFD Tortoise Adoption Program hotline at 1-844-896-5730. AZGFD will determine if the tortoise has escaped from captivity and needs to be reunited with its owner, or placed in the adoption program. Tortoises that have been through the adoption program often, but not always, have small tags glued to their shell with a unique identification number.

• If a desert tortoise is encountered, AZGFD biologists want to know when and where. Email details and a photo (without handling the tortoise) to turtlesproject@azgfd.gov. "A tortoise in the road is simply trying to get to the other side, and the best thing anyone can do is to leave it in the wild," Jones said.

Tortoise conservation in Arizona is supported by the Heritage Fund, a voter-passed initiative that began in 1990 to further Wildlife conservation efforts in the state through Arizona Lottery ticket sales.

The Arizona Game and Fish Department receives Federal assistance from the U.S. Fish and Wildlife Service, and thus prohibits discrimination on the basis of race, color, religion, national origin, disability, age and sex pursuant to Title VII of the Civil Rights Act of 1964, Title IX of the Education Amendments of 1972, the Age Discrimination Act of 1975, Section 504 of the Rehabilitation Act of 1973 and Title II of the Americans with Disabilities Act of 1990. To request an accommodation or informational material in an alternative format or to file a discrimination complaint please contact the Director's Office at (623) 942-3000 or by mail at 5000 West Carefree Highway, Phoenix, AZ 85086. Discrimination complaints can also be filed with the U.S. Fish and Wildlife Service, Office of Diversity and Inclusive Workforce, Attention: Public Civil Rights and Disability Coordinator, 5275 Leesburg Pike, Falls Church, VA 22041.