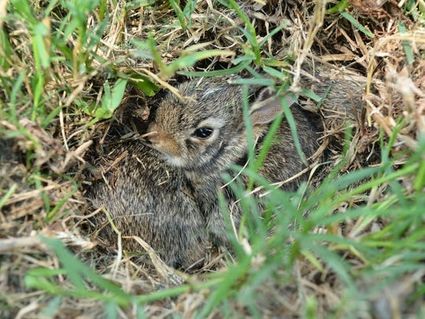 The Arizona Game and Fish Department (AZGFD) reminds the public to leave baby Wildlife alone. As temperatures rise and days grow longer, newborns of many species of Wildlife are beginning to explore the world around them.

“Picking up or ‘rescuing’ baby Wildlife is often unnecessary and can have negative consequences. While the intention is well-meaning, the ‘rescue’ often results in a newborn or juvenile animal being taken from its parents, which are likely just out foraging for food and water,” said Stacey Sekscienski, Wildlife education program manager. “This can often leave a parent searching for its young, and Wildlife raised by humans is less likely to survive if released back into the wild.”

Once they’ve been removed from the wild, some species of baby animals, such as elk calves or deer fawns, may even have to be euthanized because they cannot be released back into the wild due to disease concerns. In addition, zoos and other Wildlife sanctuaries have limited space to hold them.

Each year, Wildlife centers around the state are inundated with baby birds, rabbits and other Wildlife that were unnecessarily taken from the wild.

The public should contact a licensed Wildlife rehabilitator if they encounter an animal that is clearly sick or injured with wounds or broken bones; is unresponsive or lethargic; has been attacked by a cat or dog; or there is strong evidence that the mother is dead.

Young Wildlife found in a yard or in the field is rarely abandoned. Typically, once the perceived predator (perhaps a dog, cat, or person) leaves the area, one or both parents will return and continue to care for the young.

Intentions Are Good But —

“It’s reassuring to know our Arizona community is passionate about caring for wild animals, but most often, the best thing anyone can do is just to leave baby Wildlife alone,” Sekscienski said.

For more information on what to do if you encounter abandoned or injured Wildlife, visit: http://www.azgfd.gov/urbanrehab.

If you encounter a sick, injured, or orphaned wild animal, the webpage link below will help you quickly find a qualified Wildlife rehabilitator near you. Before removing what you believe to be an orphaned animal, please take a moment to review the Leave Baby Wildlife Alone brochure.

• If you’ve already picked up a young animal, put it back exactly where you found it, or under/in a shrub nearby where its mother can find it.

Determining Whether Wildlife is Injured, Sick, or Orphaned

I Found A Bird. Does It Need Help?

• If you can safely reach the nest, you can put it back. It’s a myth that bird parents will reject their young if they smell like people.

I Found A Deer Or Elk. Does It Need Help?

• If you cannot return it to the wild, call the closest Arizona Game and Fish Department office immediately. After normal business hours call the Department’s Radio Dispatch Room at 623 236-7201.

Many rehabilitators are specialists with particular types of animals, others will provide care for all species. Some Wildlife rehabilitators, although located in major metropolitan areas, operate statewide. If you need additional assistance you can also contact the nearest Arizona Game and Fish Department regional office, also listed in this link:

For concerns about young hummingbirds, in or out of nests statewide, call Noreen Geyer-Kordosky at 520 240-2686. Noreen also offers a free PowerPoint program “Hummingbirds: Natural History” for both children (4th-12th grade) and adults (60-90 minute including time for questions) in the Tucson area. To schedule a presentation, email Noreen at n.geyerk@gmail.com .