Woodbury Fire: What Was Its Impact On Wildlife? 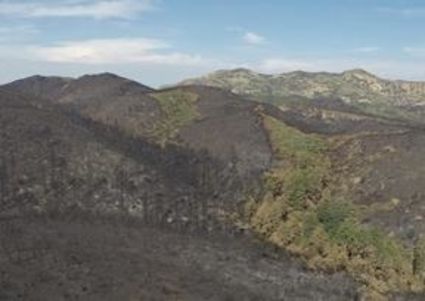 New story map and podcast discuss the fire's impact on wildlife and the Superstition wilderness.

The Woodbury Fire burned nearly 124,000 acres, much of it in the Superstition Wilderness Area, from early June through mid-July. Because of the popularity of this area among hikers, hunters and wildlife watchers, many people are asking, what damage did the fire do to landscapes and habitat? What impact did the fire have on wildlife?

There are two new resources to help answer those questions:

Woodbury Fire Story Map: Arizona Game and Fish has developed an interactive story map with information, photos and video about the fire and its impact on wildlife.

Podcast: Carrie Templin, public affairs officer for Tonto National Forest, and Dustin Darveau, game specialist for the Arizona Game and Fish Department, were guests on the Jay Scott Outdoors podcast, discussing the impact of the fire and how wildlife appeared to fare.

Templin said on the podcast that once the fire was contained, the Tonto National Forest put together a Burned Area Emergency Response (BAER) team to assess the fire's effects, potential post-fire events, and possible actions. Arizona Game and Fish staff worked with the BAER team and provided input on wildlife and habitat conditions, evaluation of the burn severity on the landscape, and identification and management of potential risks to resources from large-scale flooding during monsoon rains.

Templin said only portions of the 124,000 acres were identified as having high-burn severity, which occurred mostly in the upper regions of canyons. There were areas that burned in a mosaic pattern, with areas of light or no burn.

"For a majority of the Tonto National Forest, fire is a natural occurrence on the landscape, and much of the native vegetation is accustomed to it," she said. "Fires are not all large flames taking things out. The mosaic burn pattern can actually be good for the environment and wildlife. An exception would be the Sonoran desert landscape with saguaros, which don't do well with fire. It will be three to five years before we know the extent of saguaro mortality."

Game and Fish's Darveau said that because the fire progressed slowly and burned in a mosaic pattern, wildlife should have had time to get out of the way. Larger animals will move to a different area, birds will fly away, some ground dwelling animals will burrow underneath and ride it out. AZGFD staff conducted grid pattern aerial surveys for four days in late July.

"In that time frame, we were pleasantly surprised at the amount of wildlife we saw within or adjacent to the burn area," said Darveau. "We observed 81 white tailed deer, a black bear, some bighorn sheep, a few mule deer, some javelina, and numerous small mammals and birds. Although there was probably some loss of wildlife, we didn't see any carcasses."

Darveau said this could prove to be a beneficial burn for wildlife, but cautioned that while some areas will recover quickly, maybe in one to three years, other higher burn intensity areas may take decades. Even so, those areas will continue to provide multiple stages of vegetation succession that will benefit wildlife. Early succession stages of plants, shrubs and trees provide higher nutritional value than those that have matured and have years of old growth.

The fire was basically contained within Game Management Unit 24B, burning somewhere between 30-45 percent of the huntable area. Some of that terrain hadn't seen fire in more than 70 years, so the fire opened up some of the choked areas. Game and Fish will be monitoring conditions and harvest success.

The Tonto National Forest's Templin said a fair amount of the Superstition Wilderness would remain under a closure order through monsoon season for safety reasons; this includes the middle section of the Apache Trail.

"Monsoon storms are unpredictable, and if you get caught on one of those trails or on certain parts of the road, you could be a long way from help," she said. "The Forest Services will continue monitoring and evaluating the situation."

The closure orders can be seen on the Tonto National Forest's website, or on Inciweb, a site that provides valuable up-to-date information on wildfires.