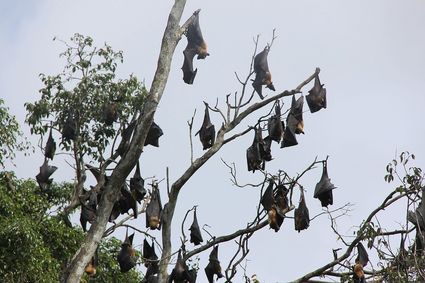 Grand Canyon National Park has received confirmation that two bats collected along the Colorado River in the park last month tested positive for rabies. The rabies-positive bats, both Canyon Bats, were deceased at the time of collection and did not come in contact with any visitors or staff.

rabies is preventable if medical treatment called post-exposure prophylaxis, or PEP, is given following an exposure to a rabid animal. It is almost always fatal if PEP is not given prior to the development of symptoms. Humans can contract rabies through contact with an infected animal's saliva, such as a bite or scratch.

All mammals are susceptible to rabies, including bats, skunks, and foxes. Possible rabies infections should be considered in animals that exhibit unusual or aggressive behavior or that are not afraid of humans.

Grand Canyon National Park would like to remind visitors about the following things they can do to protect themselves from rabies:

• Never approach or touch Wildlife. Please observe and appreciate Wildlife from a safe distance. If you see sick or erratic behaving Wildlife, notify a park employee or call the park's 24-hour emergency communications center at 928-638-7805.

• In areas where pets are allowed, make sure that pets are vaccinated and kept on a leash at all times. Domestic animal contact with bats should be minimized.

• Teach children to tell you if they are bitten or scratched by an animal.

• Anyone who has had contact with a bat or other wild animal in the park should notify a park employee as soon as possible. You should consult with your doctor in the event you have contacted an animal thought to be rabid.

• While on a river trip take extra precaution and sleep in a tent for protection. Public health officials should be contacted if a bat is found in a room where a person has been sleeping.

• Bats should never be handled by untrained or unvaccinated people nor be kept as pets.

There are 22 species of bats that live within the park. In a healthy colony, typically less than 1 percent of bats are sick with rabies. Grand Canyon National Park is working with the National Park Service Office of Public Health and the Wildlife Health Branch to protect the health and safety of visitors and Wildlife in the park by testing any sick or dead Wildlife.

Rabid bats have been documented in 49 states. Every year, there are reported cases of rabies in animals in Coconino County, Arizona. The Arizona Department of Health Services website has additional information about rabies testing, prevention and publications within the state.