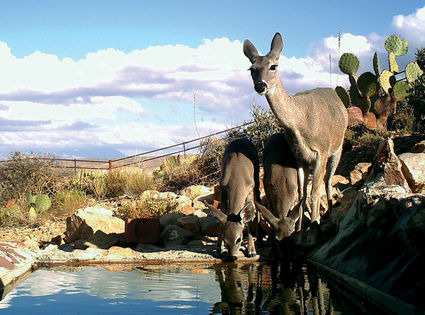 Water is the essence of life and it's just as precious for Arizona's wildlife.

Water is the essence of life and it's just as precious for Arizona's wildlife.

For that reason, the Arizona Game and Fish Department has trucked or airlifted more than 1.5 million gallons of precious water to catchments throughout the state since January 2018. And trail cameras tell the tale of this important work with footage of elk, deer, bighorn sheep and countless other species leaning over for a refreshing drink at one of 3,000 catchments maintained by the department.

To help defray rising costs of providing life-sustaining water for Arizona's wildlife statewide, AZGFD began its "Water for Wildlife" donation campaign last year to give the public an opportunity to support department efforts by texting SENDWATER to 41444 from any smart device. After sending the text as one word, without a space, a link with the department's logo will be sent to the phone to complete the donation.

Funding raised ensures that the department can deliver water to remote regions of the state, which helps mitigate population fluctuations and keep wildlife out of urban areas in their search for water. Because of the donations, the department was able to purchase a trailer and new tires for a water-hauling truck, fuel and help offset costs to airlift water to catchments for bighorn sheep.

While AZGFD partners with many great wildlife groups (see Water For Wildlife), the department bears much of the costs to haul water to and maintain about 1,000 of its own catchments statewide. Additionally, the department also maintains an additional 1,000 Bureau of Land Management and 1,000 U.S. Forest Service water catchments.

For more information about how the Arizona Game and Fish Department conserves and protects the state's wildlife or to make a donation to the Water for Wildlife campaign, visit http://www.azwildlifehero.com, or use your smart device to text SENDWATER to 41444.