Be Bear Aware; They're Hungry 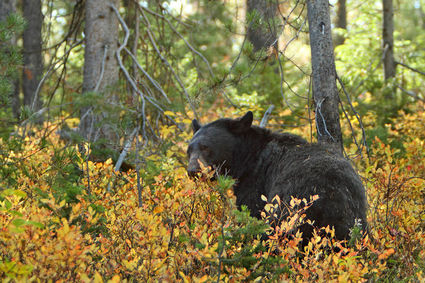 Bears are now on the move; the public is reminded not to feed Wildlife.

Arizona’s bears are on the move in search for an easy meal, and the Arizona Game and Fish Department reminds everyone to be safe by being Bear Aware

The warning comes as department officials tranquilized and safely relocated a sub-adult male bear in April in Prescott Valley. AZGFD was contacted by local police who reported that a bear had been spotted in the Prescott Valley Old Town Plaza parking lot.

Two Prescott Valley officers responded and located the bear, which ran up a tree at a nearby residence. The bear remained in the tree until AZGFD Wildlife managers could respond, tranquilize the bear and safely relocate it to an undisclosed location.

It's That Time Of Year

“It’s that time of year when bears have awoken hungry and are in search of easy food and water,” said Regional Supervisor Larry Phoenix, of AZGFD’s Kingman office. “Thankfully we were able to safely return this bear to the wild. However, that isn’t always the case as bears can become dangerous after they’ve been habituated to human sources of food and denied their next meal.”

Under department policy, Wildlife officers consider the bear’s behavior, age, sex and whether it’s a threat to human safety when determining what action to take on when to relocate or lethally remove a bear.

The department spends considerable time and resources each year to remove or relocate habituated bears to minimize the risk to people. However, removing a bear does not always solve the problem as approximately half of all bears that are relocated travel great distances and return to where they were captured.

Garbage stored outside is often the most common bear attractant. A study conducted by the town of Pinetop-Lakeside in the 1990s found that homeowners who left their garbage outside had a 70-percent chance of being visited by a bear. If the residence was near a thickly wooded area or at the edge of a housing development, the chances were even higher.

What You Need To Do

Do your part to keep bears from posing a threat and needing to be removed:

• Keep all trash inside a secured area until collection day. If that’s not possible, keep food waste in a bag in the freezer and place those in the trash as close to collection time as possible.

• If you’ll be out of town or are a weekend visitor, ask a neighbor to place your trash out on collection day.

• Take bird feeders down at night.

• Keep pet food inside or remove all uneaten food.

• Call 911 if you’re in a life-threatening situation with a bear. To report a bear sighting in an urban area or neighborhood, please contact your local AZGFD office or the department’s Radio Room at (623) 236-7201.