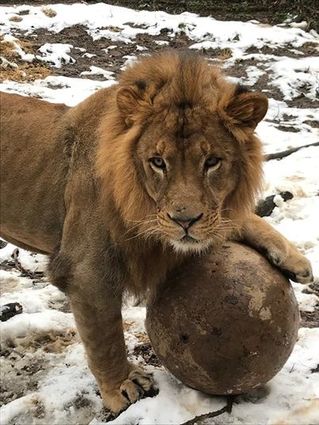 WELCOME! -- Boboo (Ba-Boo) has a new home: The Phoenix Zoo. He arrived on March 10 from the Columbus Zoo and Aquarium in Ohio. Boboo is a brother of the late Kitambi, both offspring of Tomo and Asali, also at the Columbus Zoo.

We received a three-and-a-half-year-old male African lion, Boboo (pronounced Ba-boo), from the Columbus Zoo! Boboo arrived yesterday (March 10) and will spend time in an off-exhibit area to acclimate to his new surroundings. He was transported to his night house upon arrival and is doing well. It is unsure of how our current 20-year-old female. Phoenix Zoo