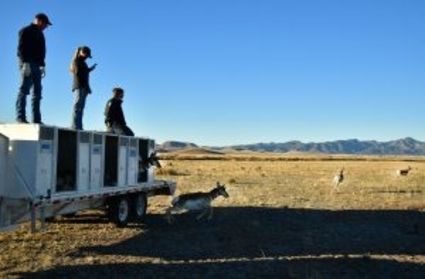 The fastest land animal in North America can make it seem so effortless, reaching a top speed of 55 mph, then being able to coast at 30 mph for miles. When they get their wheels rolling, there isn't a predator that can keep up with them, let alone catch them.

There is one thing, however, that an estimated 100 pronghorn that have roamed the Glassford Hill area near Prescott Valley cannot outrun - development.

The Arizona Game and Fish Department (AZGFD), in partnership with the Arizona Antelope Foundation (AAF) and local private landowners, reduced the size of the iconic herd by capturing 45 of the fleet-footed animals and transporting them to various release sites in southeast Arizona in late January.

"Our mission at Game And Fish is to conserve and protect all of Arizona's wildlife," said Erin Butler, terrestrial Wildlife program manager for the department's regional office in Kingman. "With a four-lane, divided highway to the north, an encroaching subdivision to the east, another housing community under construction to the west, and more development to the south, this particular herd needs our help.

"As development in this area continues, and their habitat dwindles, these pronghorn will find it increasingly difficult to survive. Our goal is that translocating them will boost and add genetic diversity to existing populations in the southeast portion of the state."

The one-day operation was conducted on private property south of Highway 89A. A helicopter was used to round up and funnel the pronghorn into a holding area, where Wildlife biologists, veterinarians, and others evaluated the health of each pronghorn, attached an ear tag for identification and fitted them with GPS tracking collars.

The pronghorn then were transported almost 300 miles south to release sites near Bonita, Altar Valley and San Bernardino Valley, where they will bolster a small population numbering about 100. Extensive habitat improvement work has been done in these areas over the past 10 years in partnership with the Arizona Antelope Foundation and the National Resources Conservation Service (NRCS), both of which provided funding and volunteers. 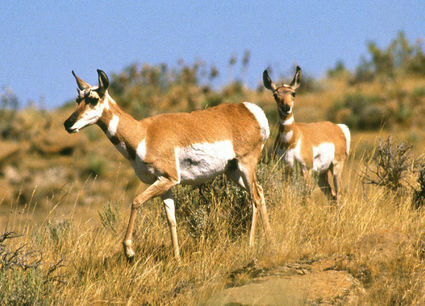 These improvements included clearing 22,000 acres of mesquite, modifying 35 miles of fencing to facilitate easier pronghorn movement, and the placement of 15 water troughs.

As for the remaining pronghorn near Glassford Hill, AZGFD expects the lower-elevation grassland habitat to be completely developed within the next five to 10 years, resulting in a decrease in the population through natural attrition.

Costs incurred for the operation were paid for through Wildlife restoration funds (which are generated by sportsmen who support conservation through their purchase of hunting, fishing and other outdoor equipment), as well as support and volunteers from AAF and NRC.