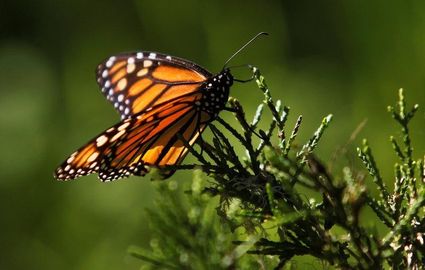 Over the last two decades, the iconic monarch butterfly populations have declined 80 percent throughout its historical range in the Western U. S, but the famed species will now get a wing up with assistance from the Arizona Game and Fish Department (AZGFD).

The department recently helped to complete the Western Monarch Butterfly Conservation Plan, which was recently adopted by the Western Association of Fish and Wildlife Agencies, of which AZGFD is a member. The new plan establishes population size and habitat conservation goals, strategies and actions for the monarch butterflies that overwinter along the California coast and range primarily across California, Arizona, Nevada, Washington, Oregon, Idaho and Utah.

"The Arizona Game and Fish Department is proud to partner with WAFWA on this plan to do our part to help restore populations of this iconic species throughout the western U.S.," said Jim deVos, assistant director for Wildlife management at AZGFD. "We look forward to collaborating with our many partners to enhance monarch butterfly conservation as a means to promote improved habitat health for all Arizona wildlife."

As part of this effort, the department plans to help incorporate the objectives of this plan at a number of AZGFD Wildlife Areas throughout the state. Opportunities for the public to help plant milkweed and monitor and/or tag monarch butterflies will be announced as various project planning progresses.

The monarch butterfly is an iconic species in North America and its annual migration cycle is one of the most remarkable natural phenomena in the world. However, over the past 20 years, the western monarch butterfly population has declined throughout much of its western range, largely due to loss of habitat for breeding, wintering and foraging.

In 2017, WAFWA established the Western Monarch Working Group to lead a multi-state cooperative agenda for conservation of the butterfly population. AZGFD, other WAFWA member states, university and non-governmental partners then led an effort to develop a strategy to enhance monarch populations west of the Rockies.

Conservation elements include a system to track implementation efforts identified in the Western Monarch Butterfly Conservation Plan and transition milkweed data into WAFWA's Crucial Habitat Assessment Tool. With this information accessible online, land managers will be able to identify and prioritize areas for monarch and other pollinator conservation efforts.